“Extra's” AJ Calloway caught up with Ryan Reynolds in San Francisco as he handed out one of Deadpool's favorite foods, chimichangas!

While chatting beside his “Deadpool” food truck, Ryan revealed how his daughter James reacted to seeing him in his character makeup. “She wept and cried when she saw my makeup… she sees her father and what sounds like her father, but what looks like a deep fried testicle... so that's alarming for a 1-year-old.

Reynolds also praised his wife Blake's parenting skills, saying she's the faster diaper changer. “My wife can do it when the baby's running, which is spectacular… she's the David Copperfield of bodily functions.”

Circling back to “Deadpool,” AJ asked if Hugh Jackman will make an appearance as Wolverine.

“I'm not giving that away… he will orbit that movie, I'll give you that much.”

He also gushed about Jackman, saying, “Honestly you cannot find a better ambassador for not only Hollywood, [but] for the superhero genre… he is a legend, he's my hero as well, he's a great guy.”

Reynolds' food truck stint comes just after he got caught with wife Blake trying to sneak apple pies across the border into Vancouver.

“I don't know that it's illegal, I just didn't mention it to the border patrol,” he said, joking, “Look I am an actor, you should be happy I'm not smuggling methamphetamine. I mean, half of my peers are high on that.” 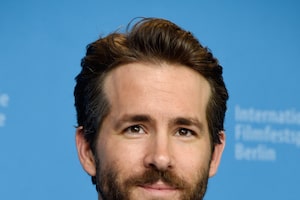 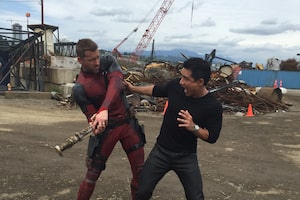