"Extra" has an exclusive clip from tonight's "Brooklyn Nine-Nine"!

The episode will also follow Jake and Amy's first real vacation together. Too bad Amy's perfectly planned cruise ship itinerary is thwarted when they discover an old adversary is aboard. Meanwhile, Gina and Terry help Captain Holt survive his visit from Debbie, while Charles and Rosa vie for the same apartment. 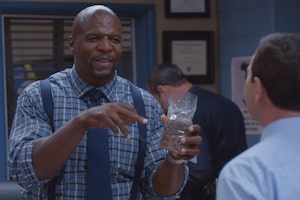