This weekend, Ronda Rousey is making her first big appearance since losing her UFC championship to Holly Holm in November.

“Extra's” AJ Calloway had a chance to catch up with Rousey before she hosts “Saturday Night Live,” which will require her to showcase her acting skills. Though Ronda has been acting on the side, when should we expect see Ronda back in the ring? “I mean, I'm kind of overlapping the two of them right now because I don't want to finish one and have to start at zero 'cause that's what I had to do after the Olympics is I had the Olympic medal and I had to start from zero all over again and I… I really learned from that as much as I could and I don't want to be put in that position again.”

Rousey has gotten a taste of Hollywood with some movie roles, but she was more excited for her big TV gig, saying, “It's like a dream come true that I forgot to have at first, you know what I mean? Like I stumbled upon all of this and I'm like, 'Oh, my God, this is amazing!' This is like somebody else's suggestion of a dream that I'm suddenly in, and I love it… I never really saw any of this coming, but I'm really appreciating all of it now that it's here.”

Rousey is appreciative, but admitted she is also a little nervous. “Nerves help me to focus and do better.”

Rousey revealed that she would like to see Tina Fey channel Sarah Palin again on "SNL" in the future. She gushed about Fey, “Her Palin impression is the best. If I could actually see that in person, then, I mean, I could say I could die happy.” 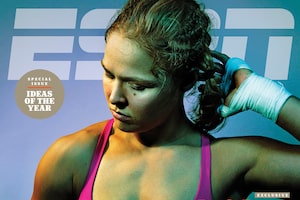