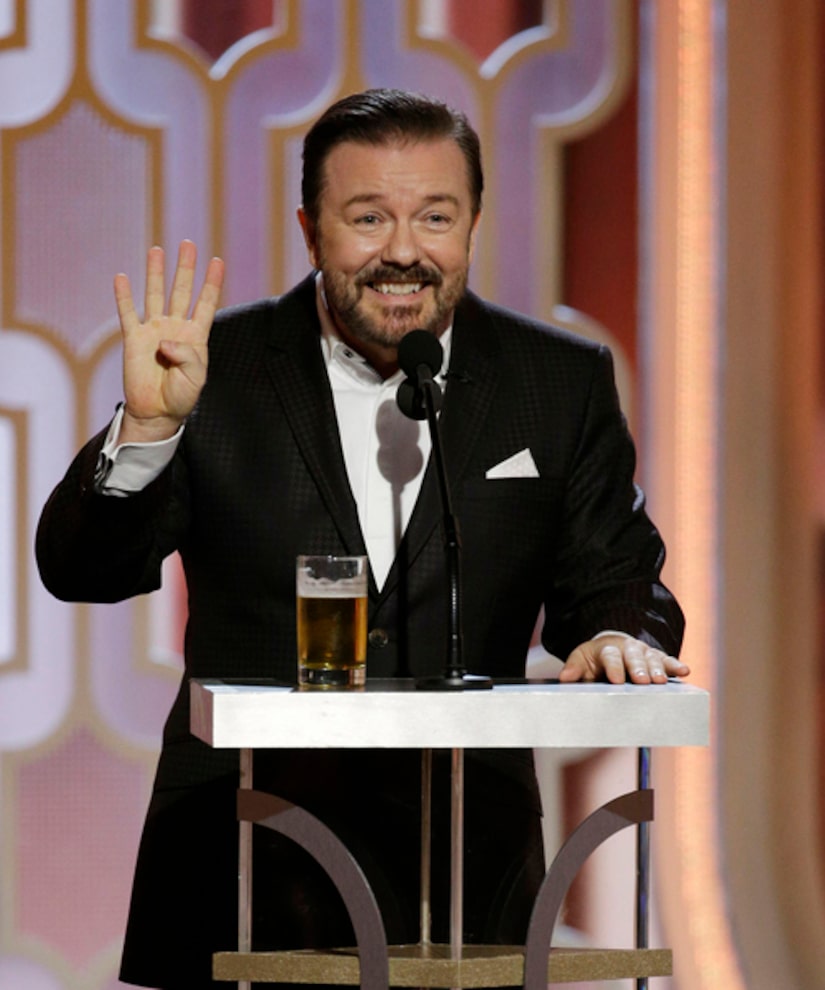 Host Ricky Gervais is taking center stage as the 2016 Golden Globes are handed out… and we are there to give you running commentary of Sunday night's festivities!

10:56 PM: Best Actor in a Drama goes to... Leonardo DiCaprio for "The Revenant"! He takes a moment to dedicate his award to all the First Nations cast and crew who worked on the film and to the indigenous people around the world.

10:53 PM: Eddie Redmayne just presented the Best Actress in a Drama Award to... Brie Larson from "The Room"!

10:42 PM: Jim Carrey, rocking a big beard, has the crowd laughing before introducing the Best Comedy nominees. The winner is... "The Martian"!

10:32 PM: Michael Keaton presents Best Actress in a Comedy to Jennifer Lawrence! She thanks David O. Russell, Joy Mangano and her family, before telling someone, possibly, David O. Russell, "I want us to be buried next to each other."

10:21 PM: Ricky welcomes the "most talented actor in the room" to the stage, Morgan Freeman, to present Best Director. The winner is Alejandro González Iñárritu for "The Revenant."

10:19 PM: Chris Evans presents "Spotlight," which is up for Best Drama.

10:11 PM: Tom Hanks gives a moving speech ahead of Denzel Washington being presented with the Cecil B. DeMille Award! Denzel says he lost his speech, oops! The actor's family joins him onstage, saying his son Malcolm is missing because he's working on his thesis at AFI. Denzel is speechless, before recalling his first time he was invited to a Hollywood Foreign Press Association event. As he struggles with his words, his wife says he needs his glasses, and they share a laugh. Denzel is sure to thank his family -- at their prompting -- before they leave the stage. 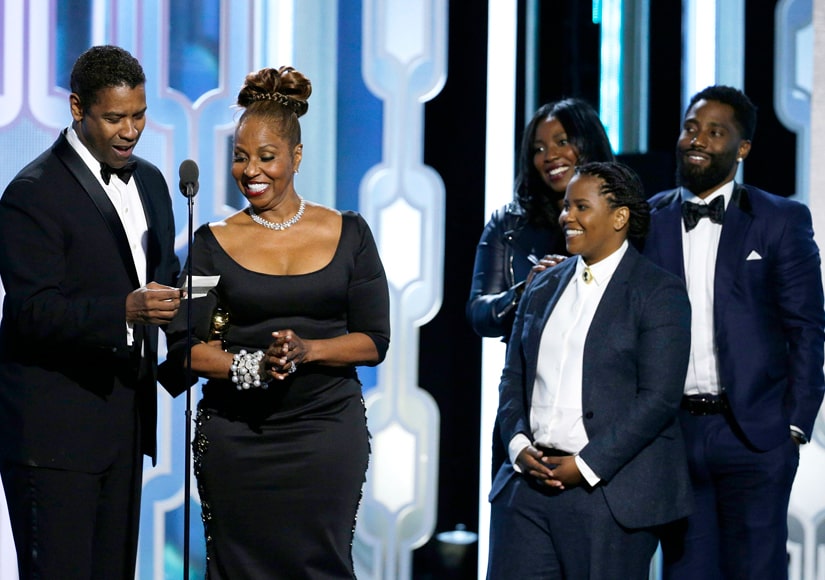 9:56 PM: Wow, we can't believe what just happened between Ricky Gervais and Mel Gibson on live TV. We think we know what Ricky asked Mel, but we won't be repeating it here. Watch the rest of their awkward exchange here:

9:45 PM: The stars were there to present Best Actress in a Mini-Series or TV Movie. And the Golden Globe goes to... Lady Gaga!!! She just kissed fiance Taylor Kinney and looks to have tears in her eyes. Once she starts her speech, Gaga says she feels like she's in "Moonstruck," thanking Ryan Murphy for believing in her, and also thanks the cast and her team.

9:41 PM: Ricky's latest joke: If Brad Pitt and Angelina Jolie saw the next two presenters they would want to adopt them. The presenters? Kevin Hart and Ken Jeong from "Ridealong 2."

9:38 PM: Were presenters Helen Mirren and Gerard Butler flirting? Wow! Anyway, the pair announced that "Son of Saul" is the winner of Best Foreign Film!

9:31 PM: Melissa Benoist and Grant Gustin take the stage to present Best Actor in a TV Comedy... which goes to Gael Garcia Bernal for "Mozart in the Jungle."

9:26 PM: Mark Wahlberg and Will Ferrell are excited about 2016... wearing some very festive glasses. The crowd giggles as Mark struggles to read the teleprompter and Will shuts them down. The "Daddy's Home" co-stars are presenting Best Screenplay... and the Golden Globe goes to Aaron Sorkin for "Steve Jobs"!

9:21 PM: Next up JK Simmons and Patricia Arquette present Best Supporting Actor, which goes to Sylvester Stallone for "Creed"! He thanks his imaginary friend Rocky Balboa for being the best friend he ever had!

9:17 PM: Here's something we never thought we would see... Ryan Gosling miffed at Brad Pitt! The co-stars took the stage to present their movie "The Big Short," which is up for Best Comedy. Ryan says he thought he would be presenting alone and now feels like a sidekick next to Brad. Ryan asks to at least be able to read off the name of the winner, but Brad explains they are just presenting a clip. Ryan calls it a "disaster." Too funny!

9:15 PM: Aw, Kate Hudson is presenting Best Animated Film with Kurt Russell... and the winner is "Inside Out"!

9:07 PM: Amy Adams is up next to present Best Actor in a Comedy... the winner is Matt Damon for "The Martian." Matt just thanked his wife for "everything"! So sweet!

9:03 PM: Ricky just delivered another zinger saying "Joy" and "Trainwreck" are not the names of Charlie Sheen's girlfriends. The stars of the two nominated films, Jennifer Lawrence and Amy Schumer, then took the stage to present their films. Amy joked that her nickname is A.Schu, before they laughed about who Amy wants to sleep (a list that apparently includes Tom Hardy). Watch!

8:55 PM: Ricky Gervais just poked fun at Trump, telling the crowd that our future president, Donald Trump, wants to have the next two presenters deported, which happen to be America Ferrera and Eva Longoria. The two beauties are presenting the Golden Globe for Best Actor in a TV Drama... and the winner is Jon Hamm for "Mad Men"!

8:51 PM: Jamie Foxx and Lily James present best score, but Jamie tells everyone "Straight Outta Compton" won, even though they weren't nominated. Lily then goes on to announce that Ennio Morricone has won for "Hateful Eight."

8:47 PM: Tom Ford and Lady Gaga are presenting Best Supporting Actor in a TV show... and the award goes to Christian Slater for "Mr. Robot"! It is his first nomination and first win!

8:46 PM: Melissa McCarthy and Jason Statham are too much, presenting their Best Comedy nominee "Spy"!

8:39 PM: Amber Heard and Jaimie Alexander take the stage to present Best Actor in a Mini-Series or TV Movie... and Jaimie flubs the line and drops an expletive. Oops! Ultimately the trophy goes to Oscar Isaac for "Show Me a Hero."

8:25 PM: Another surprise, Best Television Series - Comedy or Musical goes to "Mozart in the Jungle"!

8:22 PM: Andy Samberg announces the next category and it is a surprise! Rachel Bloom from the new show "Crazy Ex Girlfriend" won! Rachel gives an emotional speech about how the CW saved their musical comedy and gave them a chance when nobody else would.

8:15 PM: Maura looks so cute in her glasses. There are so many thank yous we can't keep up!

8:13 PM: Next up, The Rock and Jennifer Lopez are presenting Best Supporting TV Actress. The award goes to Maura Tierney for "The Affair."

8:11 PM: Kate gives Channing and Jonah a kiss before telling everyone she is surprised and overwhelmed by the award. "What an incredible year for women in film," she says as she praises her fellow actresses. She goes on to call Michael Fassbender a legend and thank director Danny Boyle, before asking why Alan Sorkin writes so much dialogue. She also thanks her husband Ned. So sweet!

Kate Winslet Wins Best Supporting Actress in a Motion Picture - "What an incredible year for women in film." https://t.co/rSwVKQxt29

8:08 PM: The first presenters are Channing Tatum and Jonah Hill... with Jonah dressed up as the bear from "The Revenant"! There is so much bleeping we aren't quite sure what's going on. The pair are presenting Best Supporting Actress... and the award goes to Kate Winslet for "Steve Jobs"! 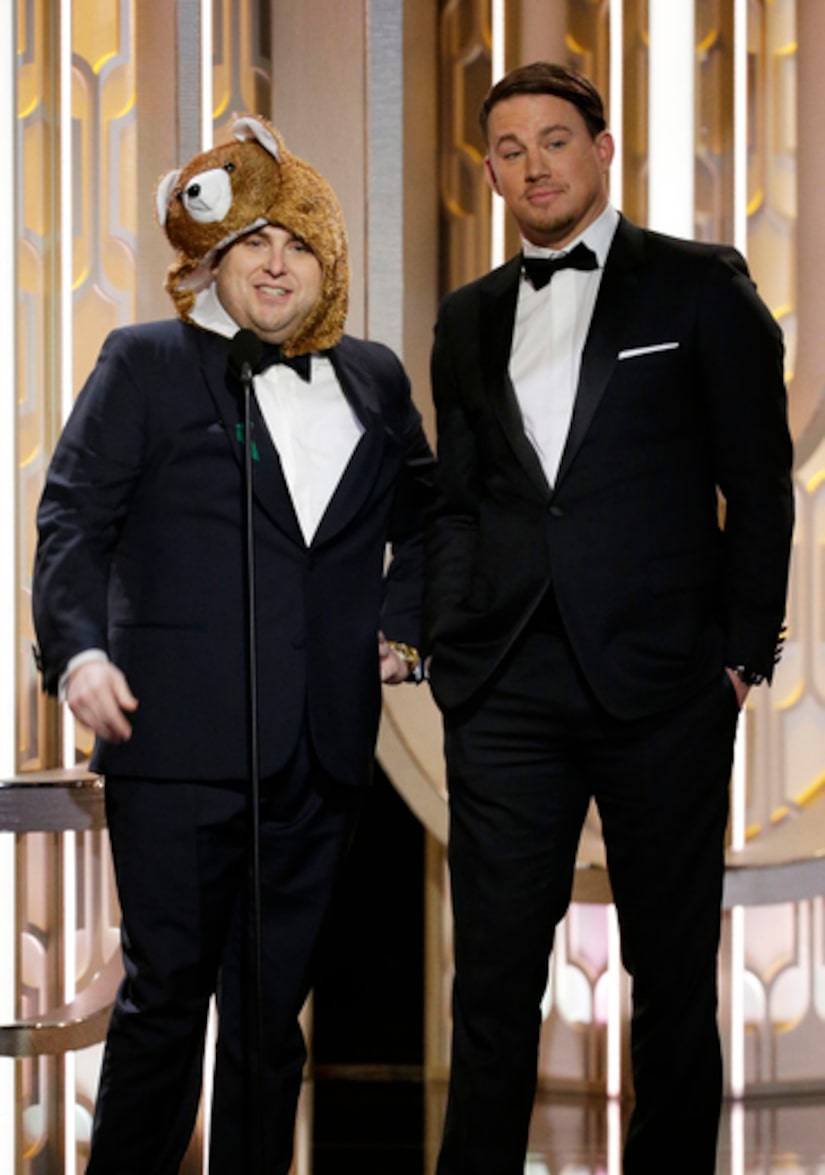 8:00 PM: It's starting! Here's a roundup of what host Ricky Gervais had to say: Ricky starts by telling the "disgusting, pill popping deviant scum" to shut up, then drops a Sean Penn joke. He then claims he's going to try to be nice. He says he's changed, just not as much as Bruce Jenner, now Caitlyn Jenner. After praising all that Caitlyn has accomplished he takes a low blow with a female driver joke. Now he's taking aim at Jeffrey Tambor, saying some things about his "Transparent" role that we can't repeat here. He then switches gears to talk about the nominated films including "Spotlight," saying Roman Polanski called it the best date movie ever. He then brings up "Joy" and equal pay for women, claiming that he got paid the same amount as Tina Fey and Amy Poehler combined. Fast forward and Ricky is joking about the fact that the studio saved on the new "Ghostbusters" by hiring a female cast. The Golden Globes aren't even safe, Ricky makes fun of the show and the Hollywood Foreign Press Association. 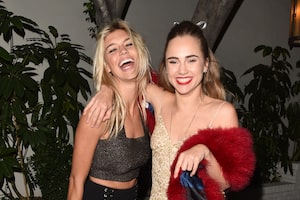 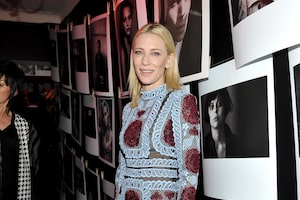