On the red carpet, she showed off her diamond sparkler, explaining that fiancé Jose Antonio Baston, or “Pepe” as he is affectionately called, was not in attendance because he was in Mexico. “He's with the kids.”

The 40-year-old also opened up about wedding plans, laughing, “We're eloping!” When Mario asked, “Are you gonna elope?” Eva admitted, “That's what I'm advocating for, I don't think it's going to happen, but that's what I'm trying to lobby for.”

The star of “Telenovela” is thrilled with the success of her new show, revealing Mexican actress Kate del Castillo is guest starring on the show this week. Kate is credited with setting up the headline-making meeting between Sean Penn and drug lord El Chapo. “Kate's amazing though, she's an amazing actress, a great friend, she's really funny on Telenovela, El Chapo aside.” 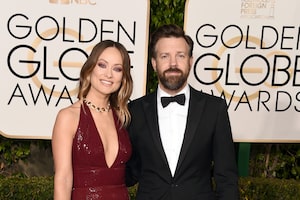 Olivia Wilde Sparkles in Michael Kors, Jason Sudeikis Kicks It In Sneakers at the Golden Globes 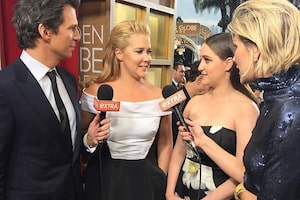