Newly engaged Eva Longoria recently hung out with “Extra’s” AJ Calloway at our H&M studios in Times Square, where she dished on the proposal and set the record straight on recent rumors.

Longoria showed off her ruby-and-diamond sparkler from longtime boyfriend Jose "Pepe" Antonio Baston, who surprised her by getting down on one knee in Dubai. She revealed, “We were in Dubai — didn’t expect it there… One hundred percent surprised me. He’s very romantic and sweet and kind, and so he put a lot of effort into it and it was very memorable.”

After AJ pressed for more details, the actress laughed, “There were camels present, a bird, a bird was present as well… A lot of animals were involved in our engagement… It was beautiful, it was romantic, it was awesome.”

The couple has not started the wedding planning yet. “We were on vacation, just soaking it all in. We haven’t even begun to discuss a wedding — that’s a lot to discuss.”

One thing she won’t be doing at her wedding is taking a dip in her wedding gown like the party did at her BFF/“Extra” host Mario Lopez’s nuptials in Mexico. She explained, “No, we’re not getting in the pool in the gowns.”

After the engagement news, there were reports that the pair would be adopting. She cleared up the rumors, saying, “I will tell you one rumor that also I want to clear up is… somebody said we’re adopting. We’re not adopting — I don’t know where that came from.” Jose is already a dad to three kids, about whom Eva said, They’re great, I love them."

Aside from the engagement, the 40-year-old is back on TV with “Telenovela,” premiering tonight on NBC. “My big return to television, back in front of the camera… it’s exciting!”

Longoria continued, “It’s just so funny. It’s a great big workplace comedy and it’s not in Spanish — people think it’s in Spanish, it’s in English! I play Anna Sophia, who’s this star of this Spanish soap opera who doesn’t speak Spanish, so she’s kinda a fish out of water in this world and she has to work with all these crazy people but most of all her ex husband comes back who she hates and she has to start working with him again.” 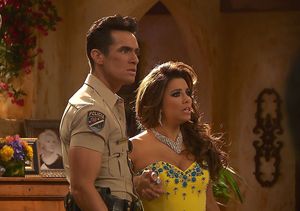 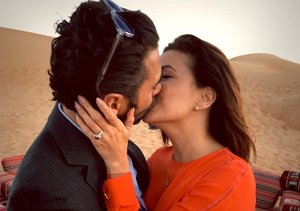 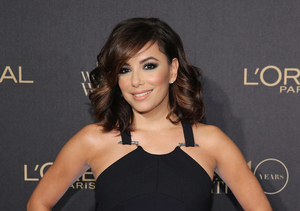