Last night, Oscar-winning actress Jennifer Lawrence appeared on Andy Cohen's “Watch What Happens Live,” where she made a few confessions during a game of Plead the Fifth.

In the game, Lawrence was asked if she had ever kissed “Hunger Games” co-star Liam Hemsworth when the cameras weren't rolling and if she had smoked pot at the Oscars, which resulted in her pleading the fifth.

On kissing Liam, Jennifer said, "Liam and I grew up together. Liam's real hot, what would you have done? Yeah.”

She also chatted about using tongue for her kissing scenes with “Joy” co-star Bradley Cooper. "Yeah, but that's normal right? Or am I a perverted co-star?"

Switching gears, Justin Bieber recently called her “so sexy” and said that he would “love to date” her. When asked if she would ever “tap that,” Jennifer responded, "I'm going to say a hard no, but thanks.”

When Cohen tried to get Lawrence to confirm her relationship with Chris Martin, she replied, “Come on, man?”

Another caller asked about her recent dinner with Adele and Emma Stone. J.Law shared, "I think Adele picked up the check, think we'd have been like, 'Adele you've had a pretty good week.' We talked about everything except work." 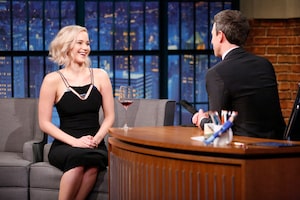 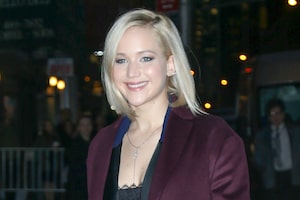 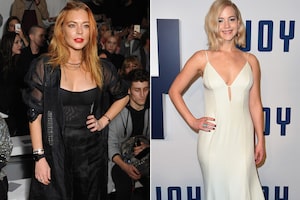