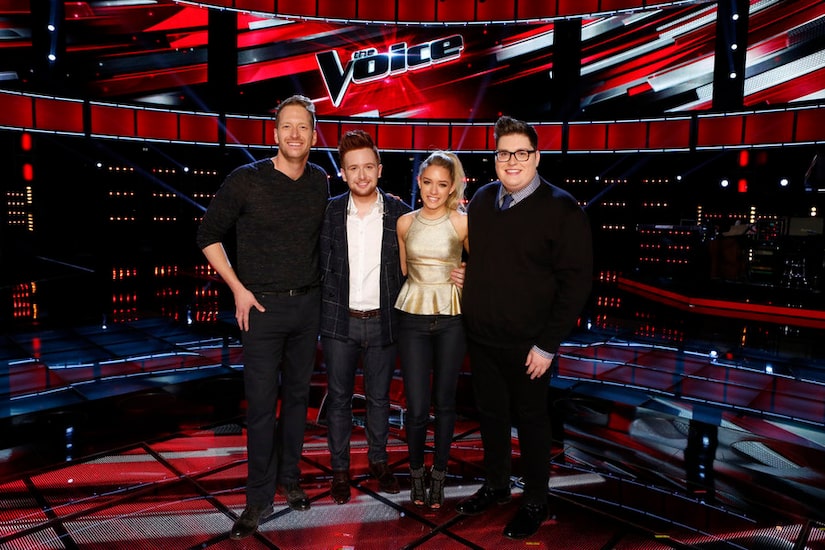 We are live-blogging “The Voice” finale results episode tonight! The show is sure to be a wild ride as superstars like Justin Bieber, Coldplay, and Missy Elliott take the stage before the Season 9 winner is crowned.

The four contestants vying for the top spot are Barrett Baber and Emily Ann Roberts from Team Blake Shelton, Jordan Smith from Team Adam Levine, and Jeffery Austin from Team Gwen Stefani. Pharrell Williams no longer has a contestant in the race.

UPDATE: After the show Adam Levine and winner Jordan Smith came backstage to talk to the press.

Adam said he was “psyched” to beat Blake again, joking, “It feels so good, oh man I'm going to enjoy this night… it is really quite beautiful because Jordan gets to win 'The Voice' and I get to tear Blake a part for the next, God, six months, bragging about my win and his drought of victory.”

He added, “I am going to think of new and exciting ways to make him feel terrible,” to which Jordan quipped, “You're welcome.”

For Jordan, the night was “surreal.” He explained, “I never expected to even be this far, but I'm so honored to be and so proud to be sitting here out of all these people who are so great. This is just so unreal it is just one of the craziest moments I've experienced.

The singer knows the real work is still ahead. “I'm at the foot of a huge mountain right now and the work is about to start.”

Smith's first priority, however, is sleep. “I'm probably going to sleep for like three days once this is all over and just not get out of bed.”

Keep reading for a full recap!

10:57 PM: Jordan Smith just got a huge hug from Adam as he accepts "The Voice" trophy. Now, he's singing "Climb Every Mountain" as the crowd goes wild!

10:54 PM: Time to find out the fourth place artist! It's Jeffery Austin!

10:45 PM: The next clip is Adam proving he's the best coach ever as he fulfills every promise he's made to his artists from lighting himself on fire to singing from the rooftops to singing until the cows literally come home. He even brought a real giraffe to "The Voice" for Shelby :)

10:36 PM: Emily Ann Roberts is taking the stage one more time for "Summer Nights." She's got her powerhouse posse right there with her, including Nadjah Nicole, Ivonne Acero, Riley Biederer and Shelby Brown.

10:29 PM: This is sure to get the crowd going... Jordan Smith singing "Any Way You Want It" with Korin Bukowski, Evan McKeel, Regina Love, Amy Vachal. It's like a laser light show in the studio. Wow!

10:22 PM: The Weeknd is up next with a compilation. He starts with "The Hills," followed by "Earned It," before launching into "Can't Feel My Face"!

10:21 PM: The show cut to a segment of the coaches racing go carts. Blake has Pharrell in stitches with his red racing overalls and cowboy hat. The foursome speeds around the track, but in the end Adam wins the race.

10:16 PM: Barrett Baber seems perfectly at ease singing "No One Else On Earth" alongside Wynonna Judd. Love these two as a singing duo.

10:09 PM: Jeffery Austin is teaming up with Tori Kelly for "Hollow." What a great song to show off their vocal abilities.

10:05 PM: The finalists are now on a scavenger hunt at Universal Studios. First they go to the Bates Motel house, then the Jaws set, followed by a Mexico set. When they get to the end four Nissan cars and their coaches are waiting! It's also fake snowing as they check out their new vehicles, which is equally exciting.

9:52 PM: Former coach Usher is back on "The Voice" stage singing "Without You" with Jordan Smith. What a pairing! Usher even brought a little humor as he looked at his watch during one of Jordan's long notes.

9:50 PM: Gwen must be crying now as the finalists make their final stop in the confessional booth. Aw!

9:47 PM: Puppets! It's the marionette version of Missy Elliott and Pharrell singing "Where They From." That's until Missy and Pharrell hit the stage with a bunch of dancers on a subway station set.

The @Pharrell and @MissyElliott GIF you've been waiting for. #WTF #VoiceFinale pic.twitter.com/elwo6Uqpxa

9:39 PM: For Jeffery Austin's bring back performance he chose Madi Davis! The duo is singing the sweetest rendition of Amy Winehouse's "Tears Dry on Their Own."

9:31 PM: Emily Ann Roberts is a country girl at heart! The songstress just took the stage with Ricky Skaggs to sing "Country Boy." In other news, Emily Ann is wearing yet another adorable pair of cowboy boots.

9:30 PM: The Gwen Stefani crying montage is bringing tears to our eyes! Of course Blake knows why she's always tearing up, "Gwen cries because she has a big heart." Aw!!

9:20 PM: This clip of Blake Shelton as the Godfather of the country mafia is everything.

9:16 PM: It's a kaleidoscope of color onstage as Coldplay performs "Adventure of a Lifetime" from their new album "A Head Full of Dreams"... and now Chris Martin is dancing with monkeys! The song finishes with a million balloons falling from the ceiling.

9:09 PM: Barrett Baber and Zach Seabaugh are singing a country classic! Who wouldn't want to sing along to Randy Travis' "Forever and Forever, Amen."

9 PM: The finale is finally here!