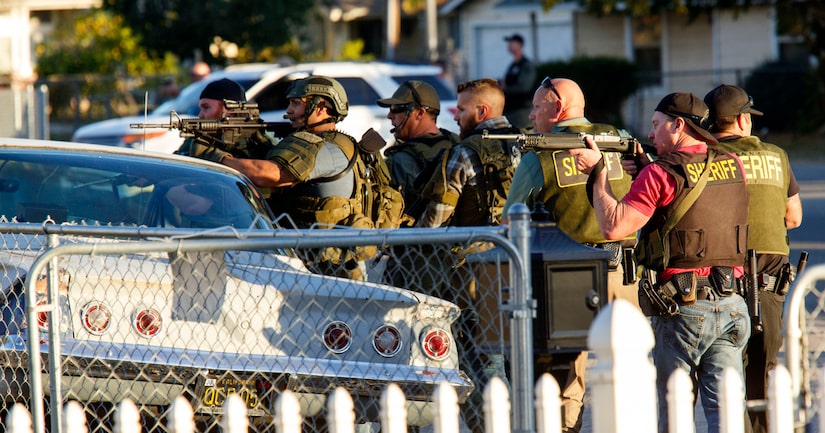 After news broke Wednesday that a mass shooting had taken place in San Bernardino, California, leaving 14 people dead and 17 others wounded, many celebrities took to social media to share their sadness and offer prayers.

Stars including Amy Schumer, Chrissy Teigen, and Maria Shriver reacted. Read some of the tweets.

This is absolutely heartbreaking-all my love to everyone in San Bernardino especially the first responders. These shootings must stop.

There is so much evil in the world. I don't know what else to say.

Welcome to America. It has been 0 days since our last mass shooting.

I feel such rage and sadness- Barbarism.

This is beyond crazy. I'm exhausted. We have to change. #WeThePeople https://t.co/GpVZT8GJBl

Our hearts go out 2 all affected by the tragic shootings. In the midst of chaos know there are people that want 2 give love. #loveisinneed

We need to fix this. Before another innocent father, mother, son, daughter, wife, husband, loses their precious life. Our country is dying.

More & more... We gotta arm Americans? Well we've armed half of them and they're killing the other half. EVERY. F'ING. DAY. This is madness.

Schumer has been fighting for gun control since a mass shooting happened at a screening of her hit film “Trainwreck” this summer.

The motive for the San Bernardino shooting is unclear, according to President Obama. It has been reported that a married couple attacked celebrants at a gathering inside the Inland Regional Center. After fleeing the scene, the suspects — Syed Farook and Tashfeen Malik — were killed during a shoot-out with police. They had reportedly dropped off their 6-month-old baby with Farook's mother before the shooting, telling her they had a doctor's appointment.

The tragedy was the 355th mass shooting of the year in the U.S. Since the shooting, the security will be amped up at Hollywood tourist attractions, including TCL Chinese Theater and the whole Hollywood and Highland complex, TMZ reports. Today, Amy Poehler will be honored with a star on the Hollywood Walk of Fame, so a large police force is expected to be present.