Grammy-winning singer Mariah Carey recently sat down with "Extra's" AJ Calloway backstage at "Live with Kelly and Michael," where she opened up about her relationship with billionaire boyfriend, James Packer.

When AJ asked about her love life, Carey used one word to describe how she was feeling: "Grandtastic."

Carey also set the record straight on rumors that she and Packer were moving in together. She explained, "Oh, my God, I was staying at his house. He wasn't there. He has houses at, like, a lot of different houses… okay? I'm sorry. I can't help it. The man owns some real estate. He wasn't there."

Switching gears, Mariah also chatted about her twins, Moroccan and Monroe. She said, "They're good. They're growing. They're four."

Mariah is currently promoting her new book, which is named after her huge holiday hit, "All I Want for Christmas Is You." On the book, she shared, "It's about a little girl and she gets a puppy and it's so cute… it's for kids."

Before her return to her Las Vegas residency at Caesars Palace in February, Carey is set to perform at this year's Macy's Thanksgiving Day Parade. "It's gonna be fun, but I hear I'm gonna be on the float for, like, three hours, which… that's a long time."

After the performance, she will be hosting a Thanksgiving dinner with her loved ones. She revealed that her favorite dish for Thanksgiving is "my father's recipe for linguine with white clam sauce."

Mariah's new book, "All I Want for Christmas Is You," is on sale now. 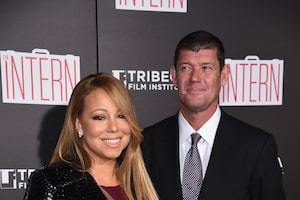 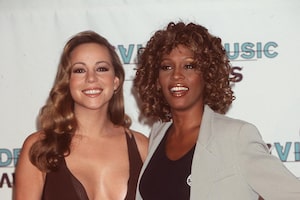 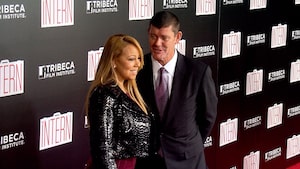 Watch! Anne Hathaway Freaks Out as Mariah Carey Arrives to 'The Intern' Premiere