Only “Extra's” Mario Lopez was with Hollywood legend Clint Eastwood as he celebrated the first annual Fall Garden Party Animal Rescue Fundraiser for the “Eastwood Ranch Foundation” run by his daughter Alison.

Mario asked him if he thinks front-runner Donald Trump can go all the way. “It's an unusual thing he's done so far… I think people are looking for somebody that's outspoken and who isn't afraid, and he seems to have a fearless attitude, he's great.”

He went on, “I like Ben Carson 'cause he's kind of a common sense guy and also doesn't seem to be afraid, and Rubio, who I've met and I like very much, and Ted Cruz… any one of them would be better than we got.”

Clint, who made a splash at the last GOP convention, said he doesn't know if he will attend the next. “I was invited last time at the very last minute, they may not want me this year because I'll be talking to chairs and doing something stupid, which was strictly off the top of my head.”

The busy actor/director is enjoying his time behind the camera these days, now directing “Sully” with Tom Hanks. The drama is the real-life story of the US Airways pilot who made a miracle landing on the Hudson River, saying filming has been going good. “We've been in New York and in North Carolina and Georgia, and we're back in California now on the Universal lot where I started out in 1953.”

He also revealed to Mario that he isn't looking to be in front of the camera again anytime soon. “Not trying for it, if someday it works out, the last really good role I had, I did 'Trouble with the Curve,' but I had 'Gran Torino,' and that picture seemed to resonate really well with everybody... someday, maybe somebody will come up with a really good role that fits my curmudgeon personality." 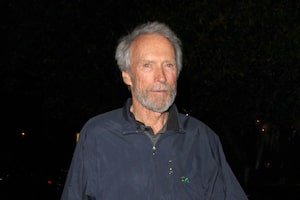 Has Clint Eastwood Found New Love... and Are They Already Living Together? 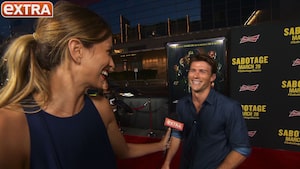