It was date night for Lady Gaga and Taylor Kinney last night – the couple only stopped to talk to "Extra's" AJ Calloway at the NYC premiere of his film "Rock the Kasbah."

The pair, who got engaged on Valentine's Day, are not ready to divulge their wedding plans yet. Kinney said, "Honestly, I think we're gonna keep it a secret." Gaga reiterated, "For what it's worth, we're just really private in more ways than people probably think… We don't really know, but we're enjoying being engaged."

On the red carpet, Gaga said of her fiancé, "I'm so excited for him. His movie's coming out — I just can't wait to see it — and I'm super happy to be here with him."

Gaga is riding high as a featured part of "American Horror Story: Hotel," while Kinney continues to appear on "Chicago Fire." The pair shared a laugh when AJ asked if they watch each other's shows, with Gaga saying, "Yeah," while Taylor promptly responded, "No." Gaga insisted, "I watch his show," then demonstrated how her fiancé watches her in "American Horror Story: Hotel" — with his hands over his eyes.

Regardless, Kinney is extremely proud of his bride-to-be, "I could't be more proud… she's doing something she loves doing. I don't know how else you support your partner and companion than support them, so do your thing, honey."

Now that Gaga has made her acting debut, could she make a cameo on "Chicago Fire"? Gaga said, "We've talked about that." Kinney didn't want to reveal too much, adding, "Hey, it's an open invitation." 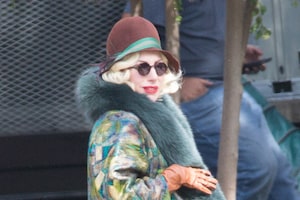 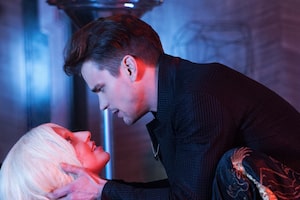