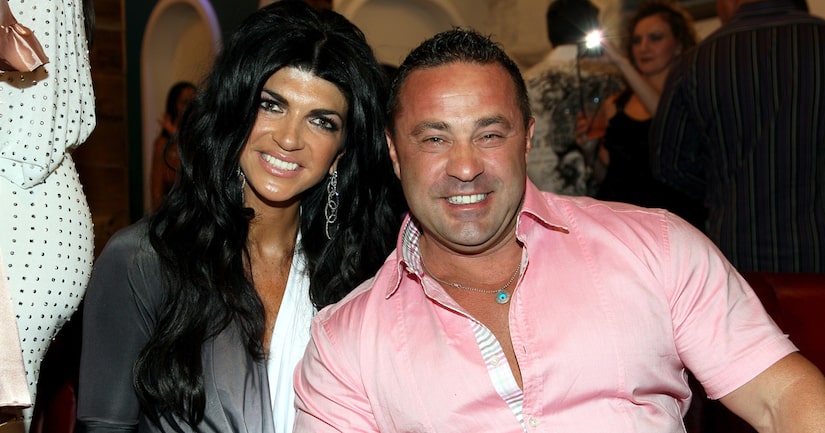 "The Real Housewives of New Jersey" star Joe Giudice and brother-in-law Joe Gorga sat down with “Extra's” AJ Calloway after they appeared on Andy Cohen's show, “Watch What Happens Live,” where they opened up about their lives while Teresa is in prison.

Joe Giudice has been taking care of their kids while Teresa serves her prison sentence. He shared, "I miss my wife every day… she let me know before she left, 'You better take care of my girls.'"

Teresa is scheduled to complete her sentence before Christmas. Joe said, "Yeah, it'd be better if she were home for Thanksgiving, but what are you gonna do?"

While Teresa is in prison, Gorga has his own way of dealing her prison sentence. “I dream a lot about her. I dream that I am hanging out with her… we count the days down. My dad's always saying… another three months, another three months… it's very difficult to talk about this."

Once Teresa is released, Joe will start his own prison term “at the end of March.” Right after Joe completes his sentence, he could face deportation, but that seems like the least of his worries. "I'm not even thinking about it. That's something you don't deal with until the time comes.”

If he is deported to Italy, Joe is certain that his family will be there to support him. He said, "I'm sure my family will come with me, but we'll see what happens."

Joe addressed rumors that he and Teresa would be starring in a “Housewives” spinoff, saying, "When she comes out, we're gonna have a little family time and then we'll decide what's going on."

AJ also asked about Giudice's relationship with Gorga after they blamed each other for Teresa's imprisonment on last night's episode of "Watch What Happens Live." Giudice replied, "We're alright. You gotta take my brother-in-law for what he is.”

On the show, when Gorga put the blame on Giudice, he responded, "I don't know why he would blame me, but everybody's got their own opinion on things, ya know? I would blame more him than anybody, coming on the show and talking all the crap he talked, you know, all the years everything going on, so I would more blame him than me."

Andy premiered a new promo clip from next week's episode of the three-part special, "The Real Housewives of New Jersey: Teresa Checks In."

In the clip, Teresa tells her husband, "I got shaken down," while going into detail about a scary incident during which she was physically searched by guards, who suspected she was hiding a phone. The incident took place after the "RHONJ" star asked her daughter Gia to tweet on her behalf to thank fans for their support.

Joe's interview with Andy aired after the premiere episode of "Teresa Checks In," which featured Teresa's tearful conversations with her family while she is in prison. In the episode, it was learned that Teresa has a 300-minute limit on phone time each month and can't surf the Internet, but has unlimited access to email.