On Tuesday, Ed Sheeran stopped by "Extra's" H&M studios in Times Square, where he hung out with his first signed artist, Jamie Lawson.

Over the weekend, Sheeran performed with Beyoncé at the Global Citizen Festival in Central Park. About the experience, he gushed, "She is a very talented performer and makes me look better than I am." [Credit: Getty]
Though Ed has scored with number-one hits like "Thinking Out Loud," his fans are still keeping him in check. He shared, "I see so many girls posting shots in pubs with fat ginger dudes and are like, 'We met Ed today.' They genuinely believe it's me."

When Jamie was asked about the kind of advice he has received from Ed, he responded, "In terms of music, 'Do what you do.' I didn't have to change a lot. Being who I am, Ed figured that was good enough."

Jamie recently opened for One Direction on their recent UK tour. Lawson said, "It came out of the blue, but not as surreal as being followed on Twitter by David Hasselhoff." 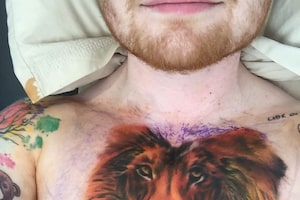 Ed Sheeran Gets Craziest Tattoo Ever! 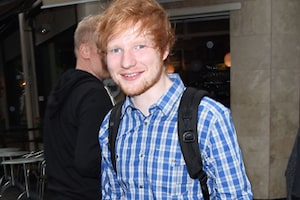 Ed Sheeran grabbed lunch at a cafe in London.