Summer is coming to a close, but the stars are still stripping down and showing off their hot bodies!

Miley Cyrus recently captured our attention with an Instagram photo of herself lying down, which she captioned, "Art imitates Life with my BBQT @mertalas 💖💖💖💖💖 late night hotel room vs early mornin W shoot 💖💖💖💖 RIP armpit hurrrrr 😿."

Kendall Jenner also posted a photo of herself relaxing on a bed in a Montce Swim bikini, while barely legal sis Kylie shared some sideboob in another pic, which she captioned, "Red."

Kendall and Kylie's older sister Kourtney Kardashian joined in on the fun and shared a photo of her hot bikini body with the caption, "Troop Beverly Hills." What a way to show ex Scott Disick what he's missing!

On the other side of the world, Victoria's Secret supermodel Alessandra Ambrosio was making everyone jealous with her bangin' bikini body on her vacation in Mykonos, Greece. See two of her photos!

Tiger Woods’ ex-girlfriend Lindsey Vonn is also on vacation and wrote on Instagram with a bikini pic, "So I had planned to go on vacation with my girlfriends and I almost canceled it because I hurt my ankle....but then I decided that spending time with my friends and being injured was better than being alone and injured. But just because I'm on vacation doesn't mean I'm not working hard :) #girlstrip #herewego @gopro #trx."

Bethenny Frankel recently flaunted her toned bikini body while lounging in the pool. She wrote, "Lobster anyone? #skinnygirlsummer." 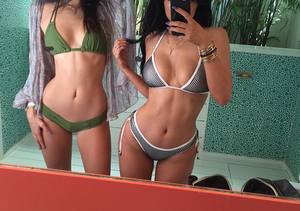 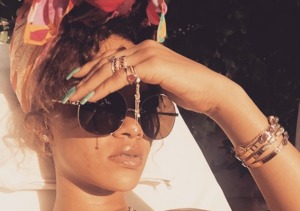 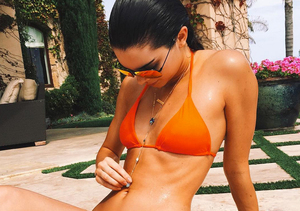 Lindsey Vonn Once Made Fun of Tiger Woods’ Sex Scandal 10