Joe Manganiello joined “Extra's” Mario Lopez at Universal Studios Hollywood, where the actor looked handsome in a suit for his chat, but the star will take it all off again playing “Big D**k Richie” in the sequel, “Magic Mike XXL.”

Joe told Mario that fans will definitely enjoy everything being “bigger” in the sequel, saying, “Everything's bigger, better, funnier, than the first movie.”

Manganiello also revealed the serious “stripping” injury he endured while making the film. “I tore my biceps during my finale routine on a sex swing. I went into the back and had this kind of Miyagi moment, I was laying on this table, and they brought in this masseuse who started messing around, and Channing said, 'Look, I can move up my routine.' I knew if I didn't do my routine today I'd never be able to get there.”

He added, “I went out, shot another four and a half hours, finished my scene and then as soon as I got back to L.A., went into surgery.”

Joe credited fiancée Sofia Vergara with helping his recovery. “Been a long, slow process, but I've got a great woman at home helping take care of me.”

The couple is busy planning their upcoming wedding. Joe popped the question at Christmastime, in Spanish, saying, “I had a huge speech. I had three years of Spanish in high school and I was really good, really fast. Then of course, twenty years go by, I forget it all now.”

He added, “I'm gonna marry a Latin woman, so I'm in a rush to get it all back, but I prepared this big speech that I gave to her on Christmas when I proposed.”

No word on when the nuptials will take place. Joe joked to Mario it will take place this weekend. “Richard Branson's been so kind as to lend us his space shuttle, so we're gonna do it up in the atmosphere.”

One thing's for sure, it will be a large affair. Says Joe, “She has about two hundred cousins, so I think keeping it small is impossible.” He also revealed that Sofia may take his last name. “We're talking about it.”

Most of the “Magic Mike” cast returned for the sequel, including Channing Tatum and Matt Bomer, plus Jada Pinkett Smith and Michael Strahan. “They kill it, I can't watch, I've seen Strahan's scenes maybe twenty times and I still can't not do [his jaw drops] that when I see his routines… like, people aren't ready.” 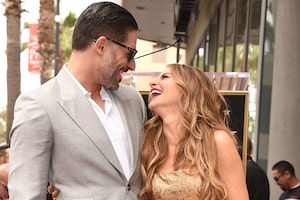 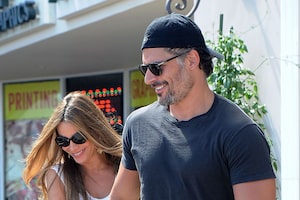