Mark Burnett is the man behind some of TV's biggest shows including: “Survivor,” “The Bible” and “The Voice,” and now the TV mogul is at it again as executive producer of the new competition series, “500 Questions.”

Burnett joined “Extra's” Mario Lopez at Universal Studios Hollywood to talk about the game show event, in which the smartest people in the country try to answer 500 of the most difficult general knowledge questions ever devised. There's only one simple rule: get three answers in a row wrong, and you're gone!

Great spending time with @MarioLopezExtra today! So excited for the premiere of 500 Questions tonight on @ABCNetwork! pic.twitter.com/5dkFLIgCSc

The show is the brainchild of Burnett and his “Are You Smarter Than a 5th Grader” co-creator reality guru Mike Darnell. Mario described the show as “'Jeopardy' on steroids,” and Burnett agreed, “That's exactly what it is, these are the absolute smartest people in the country trying to answer 500 of the toughest questions, we have neuroscientists, a lawyer, librarian, even a pro gambler, some of these people have won 'Jeopardy.' It's an amazing contest, runs night after night.”

Burnett explained, “You don't need to get 500 right, but you can never, ever get three wrong in a row, one third one wrong, you're outta there.”

What does the winner get? “Big bragging rights,” joked Burnett. “Listen, no one's impressed with the million-dollar thing anymore, doing it for fifteen years on 'Survivor.' This is more about the game, this is for someone who believes they're smart. It took a team of researchers five months to write the questions.”

Mario had his own burning question for Mark. “Where'd the beard go?” Mark revealed he shaved it on a plane! “It's gone, after a year, my wife won out… I was coming back from Rome where we're shooting 'Ben Hur' now, I was on way back, came thru Germany, was on the flight, twelve hours to go I decided, I think I'll do it.”

Burnett added, “My wife woke up and was like 'Whoa, I cannot believe it.'” 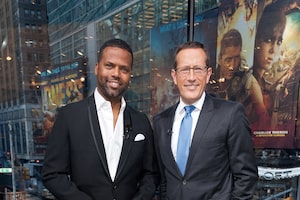 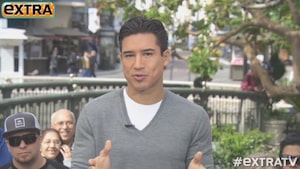 Roma Downey and Mark Burnett on ‘The Greatest Story Ever Told’ 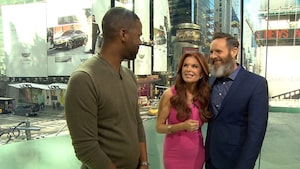