Mitt Romney spoke with “Extra's” Mario Lopez moments before stepping into the ring for his “Romney vs. Holyfield Fight Night” charity boxing match on Friday in Salt Lake City, where the former Republican presidential candidate declared he will never set his sights on the Oval Office again.

The 68-year-old told Mario that he will instead be campaigning for the Republican nominee in 2016 no matter who it may be. “I think it's hard to tell who will be able to do the best job, connecting with voters [and] building the momentum it takes to overcome an electorate that may not be inclined to vote for us, but we're gonna see that over the debates and over the campaign season.”

Romney continued, “The last few days, Jeb Bush gave a very inspiring speech at Liberty University. Marco Rubio gave a brilliant speech on foreign policy. You're seeing some very good things coming forward from those that are running on our side of the aisle.”

When asked if he thought America is ready to elect a female president, Romney responded, “Oh, sure. Carly Fiorina says it's gonna be her, and I'd rather have Carly Fiorina than Secretary Clinton.” As for Clinton, Romney acknowledged she is the candidate most likely to get the Democratic nomination as the “prohibitive favorite in her own party,' but feels “people wonder whether they can trust [her].”

Mitt added, “I, frankly, think it's kind of sad. I've been disappointed… with the current administration and that's why I'm looking for a change… I'd like to see America see better jobs [and] rising incomes. A lot of middle class families are having a hard time making ends meet, and that's not the way it should be.”

Mario asked the former Governor of Massachusetts what he thought about Patriots QB Tom Brady and Deflategate. Romney revealed he's a Brady fan. “If he had nothing to do with Deflategate, then he deserves his chance to clear up the record.”

Romney added, “On the other hand, if he did have something to do with Deflategate, he's been going about this the wrong way, because I've long heard the more you stir at poop, the bigger it stinks so we'll see what happens, but one way or the other, we're gonna get to the bottom of this.”

Romney faced off against five-time world heavyweight champion, Evander Holyfield for the charity boxing this past weekend, which raised more than $1 million for CharityVision, a nonprofit organization that empowers local physicians in poor cities around the world to overcome curable blindness. The money raised on this one night alone will fund 40,000 sight-restoring surgeries in the next year.

For more information, and how you can help, go to CharityVision.net. 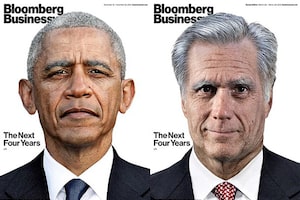 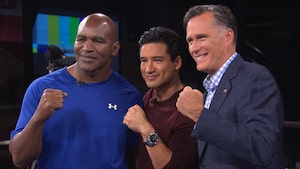 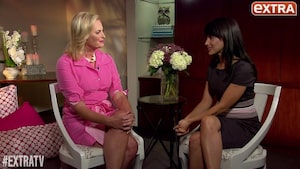