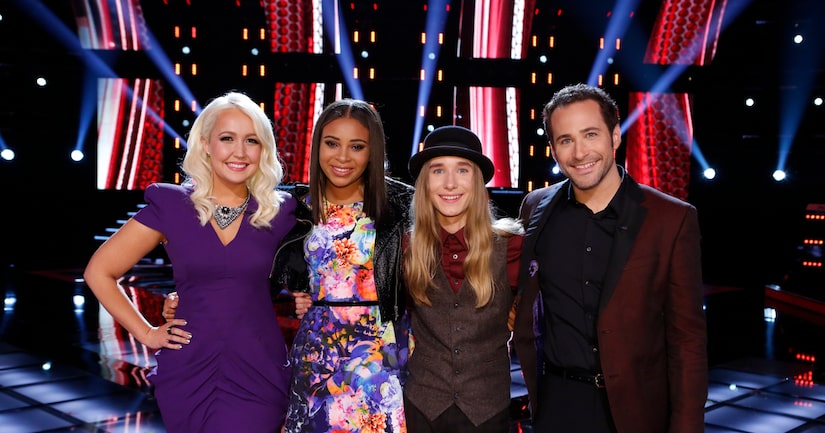 We are live-blogging “The Voice” finale results episode tonight! The show is sure to be a wild ride as superstars like Ed Sheeran, Maroon 5 and Meghan Trainor take the stage before the Season 8 winner is crowned.

The four contestants vying for the top spot are Sawyer Fredericks and Koryn Hawthorne from Team Pharrell Williams, Joshua Davis from Team Adam Levine, and Meghan Lindsey from Team Blake Shelton. Christina Aguilera no longer has a contestant in the race.

UPDATE: Pharrell Williams and Sawyer Fredericks came backstage after the show to talk to the press about their big win.

Pharrell insisted that for him the “surge of energy” surrounding the victory wasn't necessarily about finally beating Blake Shelton, it was about Sawyer.

Looking back at the season, Williams said, “The whole stint was just him saying, 'This is what I like to do, these are the songs I like,' and I never interfered. So I just feel good that I was able to sit back and just watch this guy do his thing, be himself and that was a pleasure to me.”

Sawyer said going into the finale he was a little nervous about singing with John Fogerty, but mostly excited to see the Top 20 perform. “I wasn't nervous about winning or losing because I knew I would be happy no matter what.”

As far as his future is concerned, Fredericks confirmed with a laugh that he does NOT want to move to L.A. While the 16-year-old is planning to return to the family farm in upstate New York, he will also begin recording new music, and Pharrell said he will be right there to support him along the way. Sawyer also hopes to work with some of his fellow contestants, like Mia Z, in the future.

10:57 PM: The winner of "The Voice" is... Sawyer Fredericks! That means Meghan Lindsey is the runner up.

10: 48 PM: Coach performance! The foursome sings "The Thrill Is Gone." Adam and Blake are both on guitar, Pharrell is on drums and Xtina and the guys are offering up some serious vocals.

10:41 PM: Sawyer is bringing back Brooke Adee, Mia Z and Lowell Oakley to sing Jonny Lang's "Lie to Me."

10:36 PM: Now, Pharrell and Mia Z join Carson to talk about how they wrote a song together in the studio.

10:24 PM: Ed Sheeran is back, this time to sing "Photograph," and those home videos of Ed playing in the background are the cutest thing ever!

10:03 PM: It's another duet, this time Joshua Davis and Sheryl Crowe sing "Give It to Me."

9:53 PM: Sawyer is in good company singing "Born on the Bayou," "Bad Moon Arising" and "Have You Ever Seen the Rain" with John Fogerty.

9:51 PM: It's the contestants' last confessional, and it's emotional! They talk about how much they want this and how much dedication they've put into getting where they are.

9:47 PM: Is this the song of the summer? It's Adam Levine and Maroon 5 are singing "This Summer"!

9:38 PM: Meghan Lindsey is bringing back Sarah Potenza for a duet of Janis Joplin's "Piece of My Heart." There is so much power on stage right now!

9:31 PM: Next up it's Koryn Hawthorne singing Etta James' "I'd Rather Go Blind" with Kelly Clarkson. A perfect match for such a powerful song!

9:29 PM: They just did a montage of all of Adam Levine's sports references and then retired his extra small "Voice" jersey.

9:21 PM: Meghan Trainor is up next singing her hit song "Dear Future Husband"!

9:08 PM:Joshua Davis kicks off the bring back performances with a performance of the Black Crowes' "She Talks to Angels" with former contestants Corey Kent White, Brian Johnson, Deanna Johnson and Kimberly Nichole.