While candidates such as Hillary Clinton, Ted Cruz, Rand Paul, and Marco Rubio have formally announced they are running for President, the very vocal Donald Trump has been playing coy as to whether he will run or not.

Trump was also happy to share what he would implement if he were in office. “I would do many things; create a much better healthcare system, because the country has a terrible system, do a lot having to do with the military because our military is becoming weaker and weaker, they're using old equipment, we have to spend, and I would cut taxes.”

The 68-year-old businessman also shared his thoughts on Hillary Clinton's candidacy. “She certainly will have a difficult time, it's not going to be easy for her.”

Trump revealed he has campaign spots in place. “We have people all over, we have people up in New Hampshire, South Carolina, and Iowa.” He continued, “We have a tremendous staff of people.”

Trump is a recent recipient of The Commandant's Award at The Marine Corps Law Enforcement Foundation 20th Annual NYC Gala. “It was very special to me,” said Trump, who was happy to be the honoree. “They take care of children of fallen soldiers, and it's an amazing thing.” 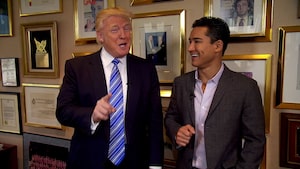 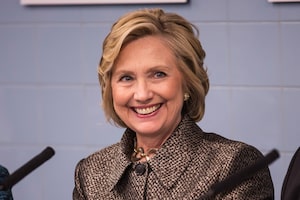