Was Nick Gordon with Whitney Houston the day she died?

In a new Dr. Phil interview, his mother, Michelle, claims Nick tried to administer CPR to the legend when she was found unconscious at the Beverly Hilton Hotel in L.A. on Feb. 11, 2012.

Is Nick Gordon in Rehab After Dr. Phil Taping?

Michelle said, “As we sit here right now, my son's life hangs in the balance. When Whitney was found, he administered CPR to her and called me as he was standing in front of her saying, 'Mom, why couldn't I do it? I couldn't get air into her lungs.' He won't let go of the guilt.”

The claim comes as a surprise, because her autopsy report states that Whitney's assistant and a bodyguard pulled her from the bathtub and requested that the hotel call 911.

That aside, it appears Dr. Phil's interview with Bobbi Kristina Brown's longtime boyfriend and his mother will be a bit of an intervention, as Gordon expressed his mental anguish and admitted to panic attacks following Whitney's death and Bobbi Kristina's own bathtub incident.

Gordon has been banned from seeing Bobbi Kristina, who remains in a medically induced coma at Emory University Hospital in Atlanta. 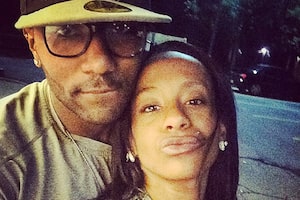