Host Neil Patrick Harris took center stage as the 2015 Oscars were handed out… and "Extra" was there to give you running commentary of Sunday night's festivities!

See all the pics on the red carpet! 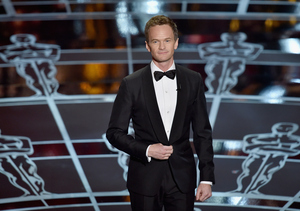 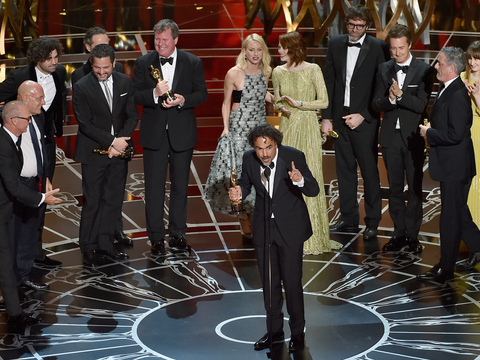 12:03AM: Sean Penn presents the Best Picture Oscar. It goes to "Birdman," in one of the closest Best Picture races in a long time.

12:00AM: Harris takes out his Oscar predictions from the glass box and basically gives a recap of the show. Pretty funny. 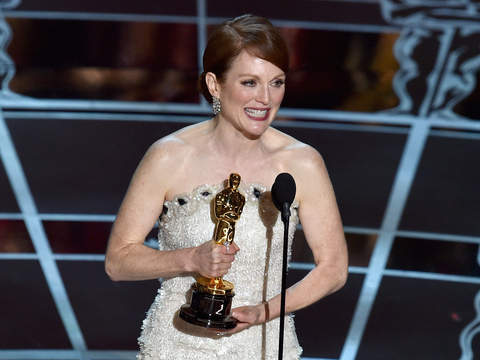 11:55PM: Best Actor leads to Best Actress. Favorite Julianne Moore finally wins her first Oscar for her devastating performance in "Still Alice." She says, "I read that winning an Oscar means you will live five years longer. So I want to thank the Academy because my husband is younger than me!" 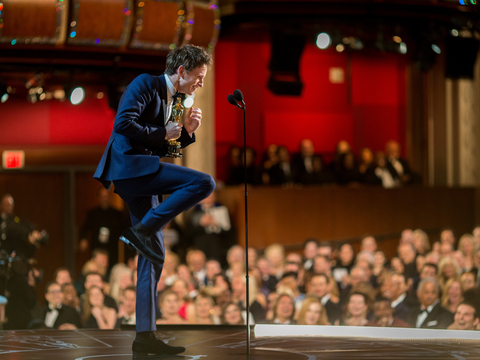 11:48PM: Ah, finally we get to one of the closer races... Best Actor. The winner is Eddie Redmayne for "The Theory of Everything." He's pretty excited to have won and dedicates the award to those suffering ALS and, of course, the Stephen Hawking family.

11:33PM: "The Imitation Game" wins Best Adapted Screenplay. Oscar winner Graham Moore gives a very moving acceptance speech about staying true to who you are and to pass that message on to other people. "Stay weird. Stay different."

11:20PM: Then Julie Andrews comes out and gives Gaga a big hug, and Andrews receives a standing ovation. She's a classy lady, as she presents the Oscar for Best Score, which goes to "The Grand Budapest Hotel." 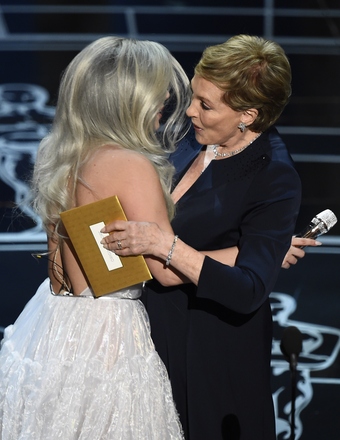 11:12PM: Scarlett Johansson presents a 50th anniversary tribute to "The Sound of Music," and Lady Gaga takes the stage to sing a medley, including "The Hills Are Alive," "Favorite Things" and other "Sound of Music" songs. She's killing it! 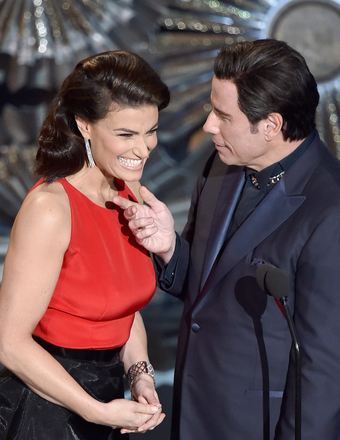 11:03PM: NPH brings the laughs with this joke: "Benedict Cumberbatch. Not only is it a great name, but it's what John Travolta calls Ben Affeck," riffing on Travolta's flub of Idina Menzel's name at last year's Oscars. Guess what? She gets him back tonight! Menzel brings her co-presenter Travolta on stage with her by mispronouncing his name. They present the Oscar for Best Song. 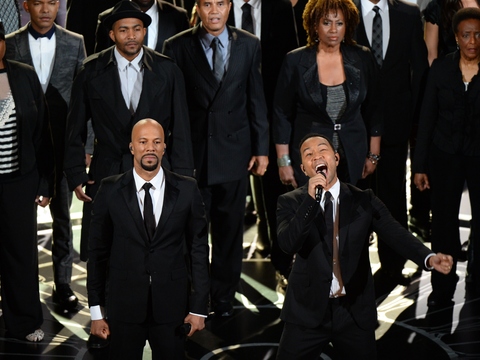 10:57PM: Harris checks in with Octavia Spencer on how she's doing with watching his locked box of predictions... and she's not there! Oh, that's because Spencer announces Common and John Legend, who sing Best Song nominee "Glory" from "Selma." The performance receives a standing ovation.

10:49PM: The awards keep coming... "CitizenFour" wins Best Documentary Feature. NPH: "Edward Snowdon, the subject of 'CitizenFour' could not be here tonight, for some treason."

10:30PM: Meryl Streep poignantly announces the In Memoriam segment... and nails it. She really can do just about everything. Then Jennifer Hudson takes the stage to sing a tribute to those we lost in the past year.

10:09PM: Best Animated Feature Oscar goes to "Big Hero 6." Wow, kudos for a surprise win considering "How to Train Your Dragon 2" was the favorite. 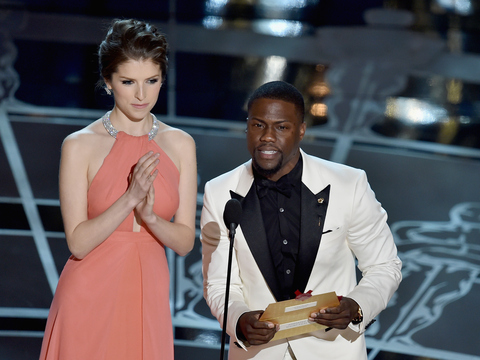 10:06PM: Presenters Anna Kendrick and Kevin Hart riff on being short while presenting the Best Animated Short to "Feast."

10:00PM: Rita Ora performs "Grateful" from "Beyond the Lights." She totally belts that one! 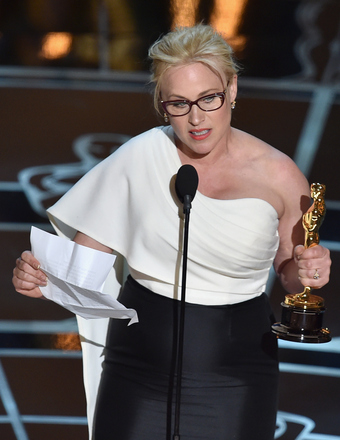 9:53PM: Patricia Arquette wins Best Supporting Actress for her endearing turn in "Boyhood." She uses her acceptance speech to demand equal rights for women in America. You go, Patricia! 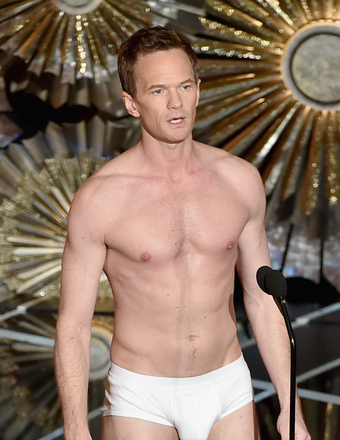 9:42PM: Harris does a "Birdman" spoof, getting locked out of his dressing room backstage and walking onto the stage in his underwear, but not before he passes Miles Teller playing the drums, ala "Whiplash." Yes, NPH is on stage in his skivvies. Classic.

9:36PM: Tim McGraw performs the Best Song nominee "I'm Not Gonna Miss You" from "Glen Campbell... I'll Be Me" which honors the country star who suffers from Alzheimer Disease. Not a dry eye in the house. 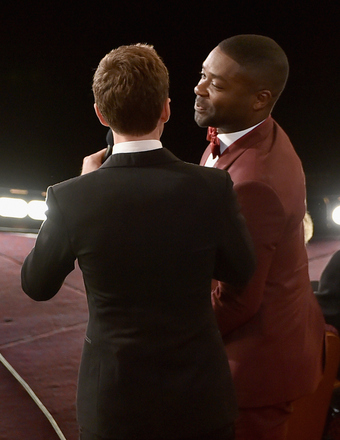 9:34PM: NPH has British actor David Oyelowo do a joke, because a British accent just sounds better when you're insulting something.

9:30PM: Harris is impressed with the dress of one of the winners of "Crisis Hotline," which simmers with little balls. "It takes a lot of balls to wear that dress." 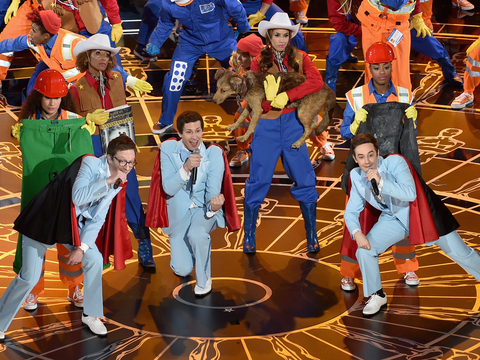 9:17PM: Andy Samberg, his Lonely Island pals, the Quin sisters, and bunch of others perform Best Song nominee "Everything Awesome!" from "LEGO Movie"... and it is!

9:16PM: NPH goes into the audience to talk to the seat fillers, including -- surprise! -- Steve Carell, who's really excited to see Edward Norton.

9:08PM: Presenters Nicole Kidman and Chiwetel Ejofor hand the Best Foreign Language Film to "Ida" from Poland. The director says his film is the complete opposite of Oscars. "Life is full of surprises," he says and then proceeds to go beyond his allotted speech time.

9:00PM: "You can eat her with a spoon," winks Harris. Presenter Reese Witherspoon announces the Best Makeup Oscar, which also goes to "The Grand Budapest Hotel." 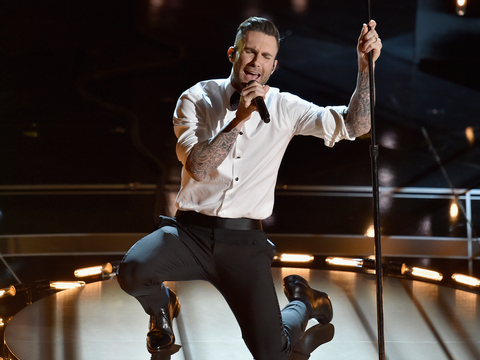 8:44PM: NPH says his Oscar predictions have been kept under lock and key with Price Waterhouse and Cooper, the folks that tabulate the Oscar winners. Then Harris asks Octavia Spencer to watch his predictions, in a glass box on stage, the whole evening. She can't leave for the bathroom or get any snacks. 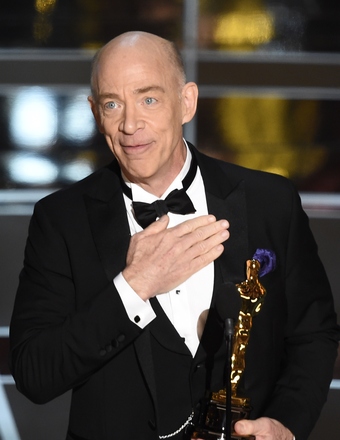 8:39PM: The first award of the night goes to J.K. Simmons for Best Supporting Actor, for his searing performance in "Whiplash." He thanks his wife and kids and urges us all to call our parents. Aww!

8:37PM: Harris says "American Sniper" is responsible for $300 million in box office grosses, the most of all the eight Best Picture nominees... and compares that to being Oprah Winfrey. "Cause she's rich" he explains.

8:33PM: Then Anna Kendrick and Jack Black joins Harris. Anna belts it out and Jack seems a little jaded! Harris has to stop Jack's singing rant, chasing him off the stage. All in all, very NPH! He doesn't disappoint. 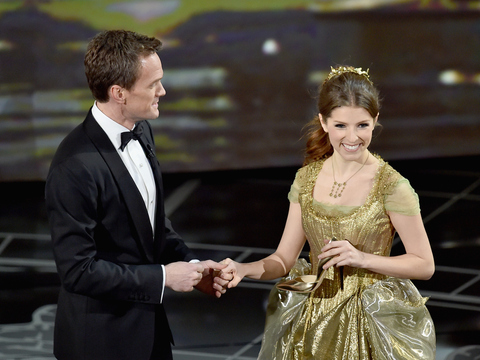 8:30PM: Host Neil Patrick Harris kicks off the Oscars, announcing, "Welcome to the 87th Academy Awards... the best and whitest, sorry I mean brightest!" Then sings a great comedic song, "Moving Pictures." Best part? Singing he hopes there will be a Kanye West moment and the camera pans to Clint Eastwood. 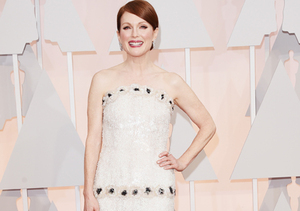 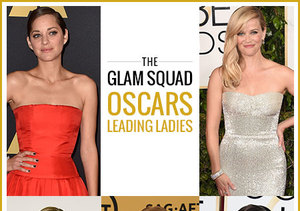 Oscar Fashion Predictions! What Will the Best Actress Nominees Wear?