It looks like Rita Ora's cleavage is causing quite a stir on British TV.

Promoting the new season of the UK version of “The Voice,” new judge Ora made an appearance on the BBC show “The One Show,” wearing a low-cut white tuxedo jacket, prompting a flurry of complaints on how inappropriate it was.

According to MailOnline.com, over 400 people complained the outfit was not fit for the family-oriented program and time frame.

BBC eventually responded, saying that the show "allows guests to choose their own attire and pop stars often opt for something glamorous or striking. We didn't feel that Rita's outfit would be outside of most viewers' expectations of that of a major pop star, but we appreciate that tastes vary… If we had been consulted we would have requested she wore something more suitable for 7pm.”

Ora will join “Voice” judges Tom Jones, Will.i.am and Ricky Wilson when Season 4 premieres this Saturday on BBC One! 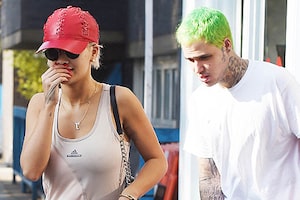 Is Rita Ora Dating This Guy with Green Hair? 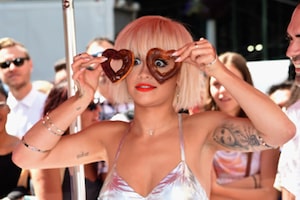 Rita Ora was in NYC handing out heart-shaped pretzels at the DKNY MYNY fragrance launch. 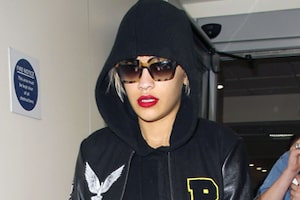 Rita Ora touched down at Heathrow Airport on Tuesday.