It looks like Jude Law is going to be a dad again. Reports say ex-girlfriend Cat Cavelli is expecting their child. 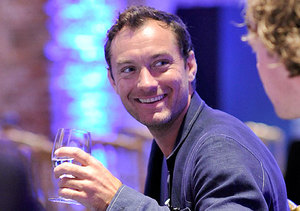 Getty
Cavelli, 23, and the “Sherlock Holmes” actor, 41, had a brief relationship earlier this year, and sources told the Mirror she is now five months pregnant.

The insider told the Mirror that the singer/model, whose real name is Catherine Harding, is “delighted” with the news. “It all happened very quickly. They met a little while ago and fell for one another, then Cat told friends that she was going out to Prague, that's when it emerged that she was in a relationship with Jude.”

The source added, “Sadly, they are no longer a couple, but that they are both so determined that the baby will be loved very much by both his or her parents.”

Law currently has four children, three with his ex-wife, Sadie Frost, and one with ex-girlfriend Samantha Burke.

Law was also engaged to Sienna Miller. They split after it was revealed he cheated with his kids’ nanny, Daisy Wright.