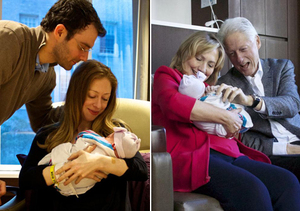 Clinton tweeted the news, writing “Marc and I are full of love, awe and gratitude as we celebrate the birth of our daughter, Charlotte Clinton Mezvinsky.”

The new parents also shared a sweet pic on Twitter.

At 7:03 PM on September 26th, we finally met Charlotte.  We’re in love. pic.twitter.com/9ZCkoa6BPU

The baby is the first grandchild of former President Bill and former Secretary of State Hillary Clinton, who expressed their excitement at becoming grandparents at a number of public speaking events in the past few months.

Charlotte, your grandmother @HillaryClinton and I couldn’t be happier! pic.twitter.com/omu6ncg54e

Clinton and Mezvinsky, an investment banker, got married in July 2010.

The Place to Be in Mexico: The Esperanza Resort 7

Is Kate Upton Thinking About Baby #2? Plus: Her Valentine’s Day… 10