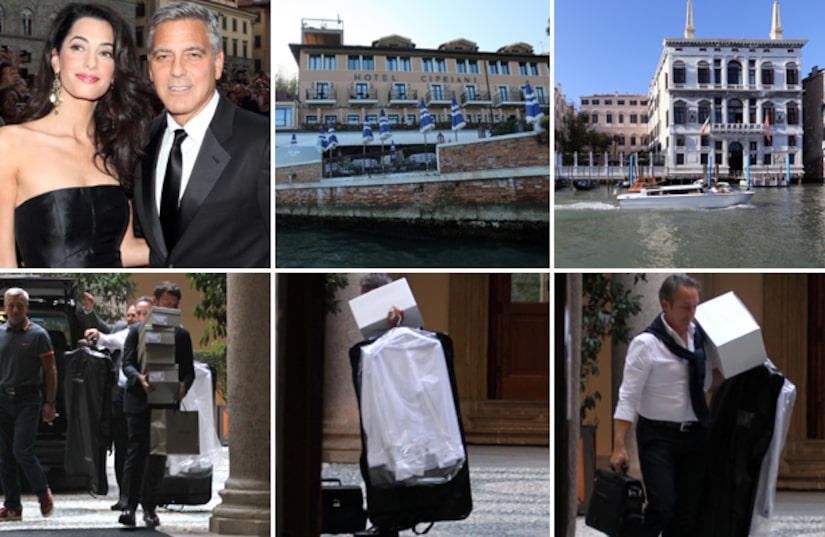 The big day is almost here! George Clooney and Amal Alamuddin are reportedly set to marry in Venice this weekend, and it looks like preparations are already under way.

Giorgio Armani announced at Milan Fashion Week that he would be dressing the Oscar winner for his wedding, and Clooney's assistant was spotted making a major pickup at Armani's headquarters in Milan on Monday.

“George has chosen and been fitted for an Armani suit for his wedding” the Italian designer told reporters.

Amal is rumored to be wearing an Oscar de la Renta dress, although she was spotted at the headquarters of Alexander McQueen earlier this month.

The couple will reportedly dine with guests – including Matt Damon, Sandra Bullock and Bono -- on Friday night at the famous Cipriani restaurant (pictured top center), before tying the knot in front of about 60 friends and family members at the Aman Canal Grande Venice hotel (pictured top right) on Saturday.

People reports that former Rome Mayor Walter Veltroni, an Italian writer, journalist and politician, will conduct the ceremony. He is said to be Clooney's close friend. This isn't Veltroni's first A-list wedding; he attended Tom Cruise and Katie Holmes' nuptials in 2006.