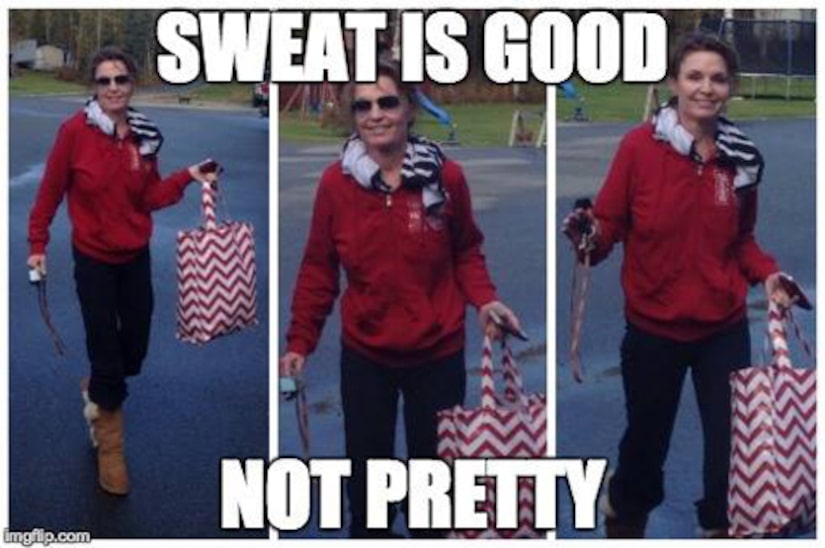 Sarah Palin was in no mood to deal with the paparazzi as she exited a hot yoga class in Anchorage on Monday, and Mama Grizzly hit back via social media.

Palin posted her own pics on Facebook with the message, “Feel bad for the poor paparazzi hounding outside my truck this morning hoping to capture a tabloid 'exclusive' of me coming out of Bikram Hot Yoga. How about we take away their 'exclusive' and I'll give you the photos first, for free!”

She added, “Yup, here's what I looked like sans makeup, drowning in sweat when the camera rolled; looking much like a sheepdog, I'd say. No one said workouts were glamorous!”

The outing marked Palin's first public appearance since her family was involved in a violent brawl at a house party last week.

The fight left Sarah's son Track, 25, with four broken ribs, and her husband Todd with a bloody nose.

Police released a statement confirming that some members of the Palin family were present at the party and that approximately 20 people were involved in the fight. Authorities said, “Alcohol was believed to have been a factor in the incident.”

Exactly how the fight began is unknown. Some reports claim that the brawl broke out after Willow Palin's ex-boyfriend Connor Cleary tried to get into a Hummer limousine following some “questionable behavior.”