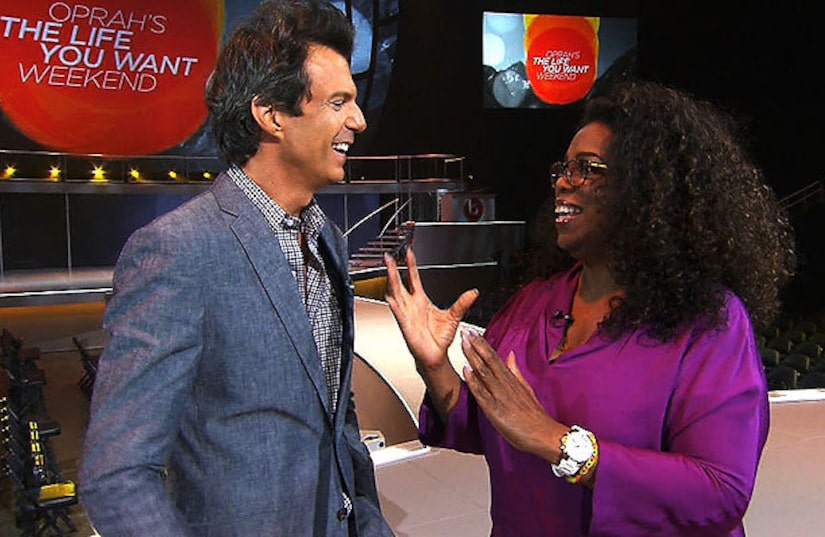 In this “Extra” exclusive, O Magazine Creative Director Adam Glassman was our special correspondent, sitting down with Oprah Winfrey at her first “The Life You Want” weekend tour, beginning in Atlanta.

Oprah explained, “When I was a little girl, I had this dream of myself being on a stage like this, speaking to an audience. I didn't know what I was talking about when I was having the dream, but this has always been something I thought would happen sometime in my life.”

Oprah continued, “For me, the message of my life is leaving people with something that can make their lives better.”

Winfrey is bringing together a motivational dream team for her “The Life You Want” tour; Pastor Rob Bell, Deepak Chopra, and authors Elizabeth Gilbert and Iyanla Vanzant are also on the tour.

Oprah revealed the single most important lesson in her life. “It was when I was 8 years old, when I first learned the poem ‘Invictus’ by William Ernest Henley. The last line of that poem is, ‘I am the master of my fate. I am the captain of my soul.’ So, that's the lesson I want people to get, is that it doesn't matter where you come from, what your mother did or didn't do, what you had or didn't have. Bottom line is, you are in the driver's seat of your own life, you are the master of your fate and you have only you to hold responsible for what happens in your life… that's it!”

Is she leading the life she wants? “What I realized when I was putting this all together is I got some slices missing in my own life and perhaps by the time I finish this tour, by the time we do the eighth city, maybe I will be closer to living the life that I want. I’m closer to it now then I was 10 years ago, than I was five years ago, even three years ago… but I’m not there yet.”

One thing Oprah definitely wants to do, “I’m going to fulfill the dream I’ve always had: truffle hunting. You go out now with the dogs now, not the pigs... the question is, do they allow you to bring the truffles back?”

The media mogul also just finished the civil rights drama “Selma,” a project she co-produced with Brad Pitt. “It's going to be, I think, a remarkable film with actor David Oyelowo, who I slapped in ‘The Butler,’” she said. “He steps up in the role of Martin Luther King. It's really good.”

“Selma” is in theaters January 9, 2015, and for now, you can catch Oprah on the road! Just go to OprahWeekend.com for more information, and make sure to tune in to “Extra” on Monday to see the full interview!