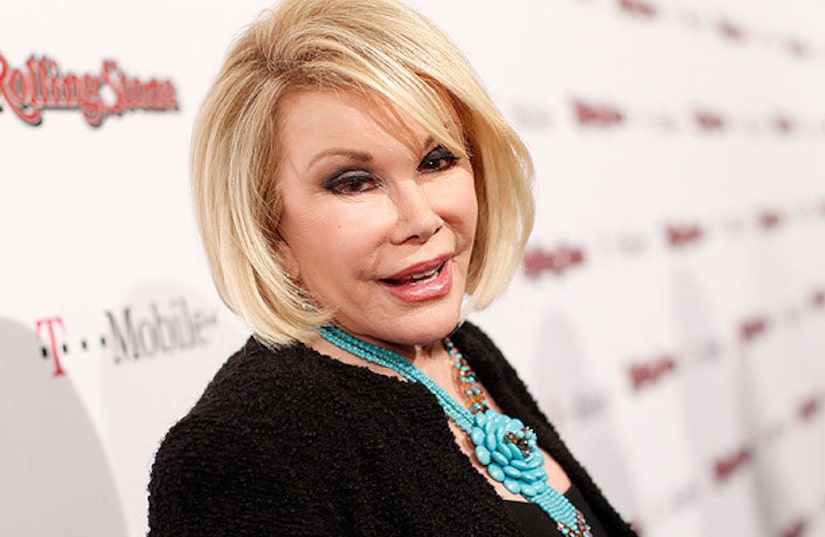 Her daughter Melissa Rivers announced the news in a statement, "It is with great sadness that I announce the death of my mother, Joan Rivers. She passed peacefully at 1:17pm surrounded by family and close friends. My son and I would like to thank the doctors, nurses, and staff of Mount Sinai Hospital for the amazing care they provided for my mother."

Joan's Best One-Liners Of All Time

She continued, "Cooper and I have found ourselves humbled by the outpouring of love, support, and prayers we have received from around the world. They have been heard and appreciated. My mother's greatest joy in life was to make people laugh. Although that is difficult to do right now, I know her final wish would be that we return to laughing soon."

A funeral for Rivers will be held on Sunday at Temple Emanu-El in NYC. Rabbi Joshua M. Davidson said in a statement, “It is a terribly sad day for all of us. We mourn with her family, friends and all those millions to whom she brought laughter and joy."

The “Fashion Police” star's health trouble started last week when she reportedly stopped breathing during a vocal cord procedure at the Yorkville Endoscopy clinic in NYC.

A 911 caller told emergency services that a patient was in “cardiac or respiratory arrest.”

She was rushed to Mount Sinai hospital where she remained on life support with her family by her side.

Rivers got her start in the early '60s in the NYC comedy club circuit. She made her first appearance on “The Tonight Show” in 1965, with new host Johnny Carson.

In the '70s and '80s, she was a regular on “The Tonight Show” and considered Carson a close friend and mentor, she later became his fill-in host.

In 1986, however, the two had a major falling out when Rivers was approached by the new FOX network to host her own late-night talk show, and didn't reportedly didn't consult beforehand with Carson. She was banned from the show until just this year, when she finally returned for an interview with new host Jimmy Fallon.

Joan married second husband Edgar Rosenberg in 1965. He was often the butt of her jokes on stage, but the two stayed married until his suicide in 1987.

Joan bounced back with a book, appearances, red carpet interviews, and line of jewelry and clothing which she sold on QVC. According to the NY Times, her jewelry has racked up more than $800 million in sales.

Pics: Joan and Melissa Through the Years

The couple had one daughter, Melissa, who went on to star with her mother in various reality TV shows, including the most recent “Joan & Melissa: Joan Knows Best.” Rivers is also a co-host on the hit E! show “Fashion Police.”

Joan is survived by daughter Melissa and one grandson, Cooper, 13.