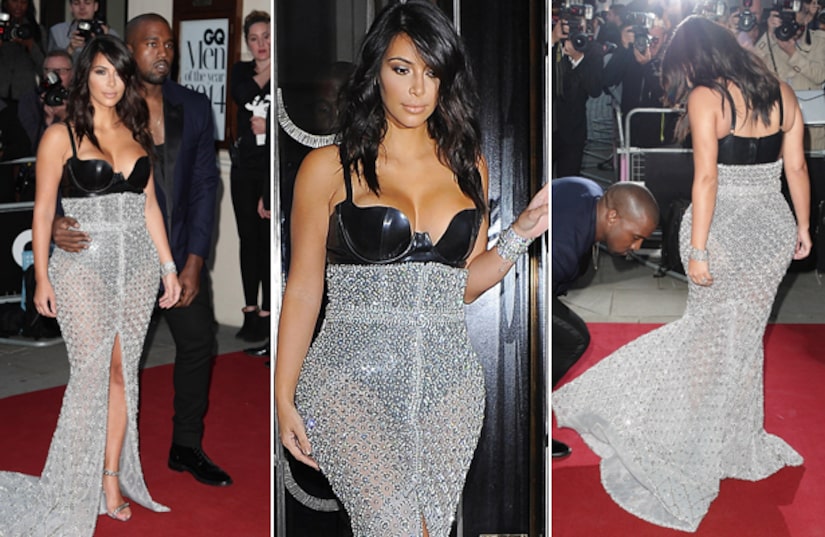 While Kim was happy to win the award, she seemed a little miffed when GQ editor Dylan Jones' used her maiden name during the introduction.

He told the crowd, "She is simply one of the most famous women in the world. The queen of social media and the queen of TV. And since marrying Kanye West in May she has become part of the world's most famous couple. She's Coca Cola famous... it's Kim Kardashian."

Kim was quick to correct Jones, explaining, "It's Kim Kardashian West. I want to thank GQ for making me Woman of the Year, and my husband for making me feel like woman of the year every day."

See her acceptance speech here, but note that the comment about her maiden name was edited out.

The 33-year-old reality star, who shared some serious PDA with Kanye on the red carpet, wore a jaw dropping, cleavage-baring, black latex bodysuit and sexy see-through couture skirt to the show.

You'll Never Believe What Kim Wore to the VMAs

A spokesperson for the fashion house said, “We started designing it four to five days ago and it was an adaption of a catwalk piece. The team really committed and prioritized it. These pieces usually take weeks to make, but we had a quick turnaround. The skirt is entirely hand-embroidered and we had a team of four people working on it. They had to pull an all-nighter last night.”