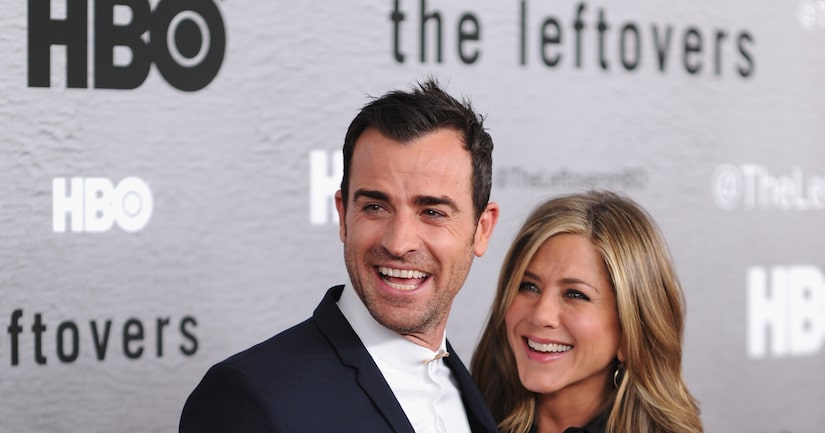 “Extra” special correspondent Rob Estes sat down with Jennifer Aniston to talk about her new film, “Life of Crime,” and she also answered the question on everyone’s mind: When will she and fiancé Justin Theroux get married?

Jen was also quick to shut down recent tabloid rumors, telling Rob “I’m not pregnant!” She recently told "Today's" Carson Daly, My "value as a woman" isn't measured by motherhood.

Theroux recently poured ice water over her head for the ALS Ice Bucket Challenge. Aniston exclaimed, “See, that’s all of who he is! He’s got a mean streak… mine went a long time!”

Estes added that Justin then kissed her on the head. She nodded, “That’s the thing you get -- the yin with the yang, the good with the bad.”

After completing her challenge, Aniston nominated Howard Stern, who took a smaller approach to it. The actress laughed, “It was a shot glass, let’s call it what it was. It was a shot of ice. I still have to give him credit. I didn’t think he would do it. I was told he would never do it. I am proud of him.”

Aniston is also proud of her work in “Life of Crime,” a dark comedy based on an Elmore Leonard novel. She plays a shrewish woman whose husband doesn’t want to pay the ransom after two small-time criminals kidnap her.

Jen explained why she was drawn to the character. “I think she has an extraordinary arch in this film, from this kind of trapped housewife in a very unhappy state and not knowing where to even begin to get out of it. I think this insane situation that takes place... you would never think that this is what helps her find her inner ninja and discover who she is. She outsmarts every single one of them.”

“Life of Crime” opens this Friday.