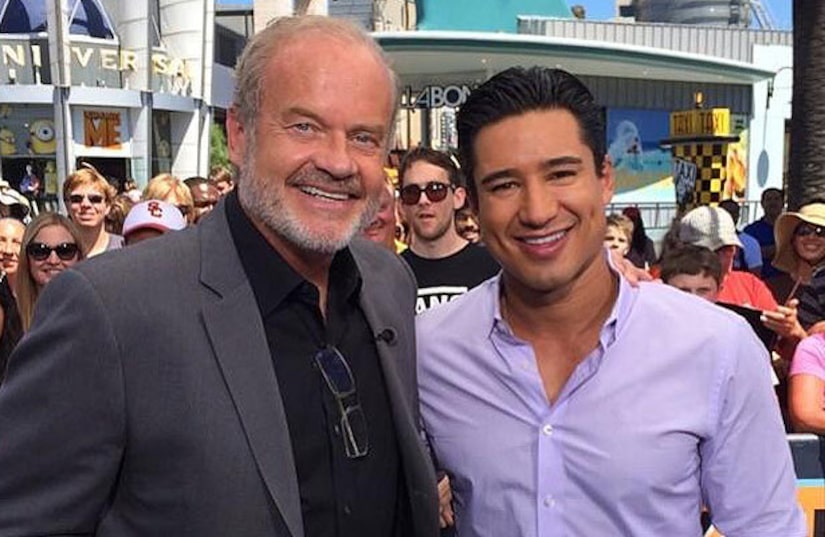 Actor Kelsey Grammer joined “Extra’s” Mario Lopez at Universal Studios Hollywood to talk about his new FX show “Partners,” and to share some good memories of Robin Williams, his college friend when they both attended Juilliard.

Grammer said, “I knew him from the time I was 18. I remember walking along the streets of Manhattan with him. I found an old couch that someone threw out, and Robin helped me carry it to my apartment, dusted it off, deloused it, stuck books under the leg that was broken, that was my couch.”

Kelsey even stayed at Williams’ apartment when he went to shoot the first episode of “Cheers.” Grammer explained, “I loved him as deeply as a guy can love another guy. We had some good laughs, we had some fun.”

Grammer also talked about life at home wife Kate, daughter Faith, 2, and infant son Gabriel. “He’s a great kid, one month old now… we had our first outing yesterday, went and got sushi. He did not have sushi, he’s still on the you know what, lovely kid.”

Kelsey explained why he and his wife decided not to have help at home with the kids. “My wife is a real tough gal. She said, ‘I never want to wake up hear my baby cry and have some other woman say I got this.’”

The TV actor is currently teaming up with Martin Lawrence for the new FX show “Partners.” “It’s just a couple of lawyers who get together out of necessity and end up forming a bond, a friendship that’s unexpected… it’s like the ‘Odd Couple’ updated with Martin and me.”