“Extra’s” Terri Seymour was with Demi Lovato as she gave fans a preview of her world tour show on the Honda Stage in Long Beach Lovato talked about on her diet, and the recent pizza party she attended with President Obama. 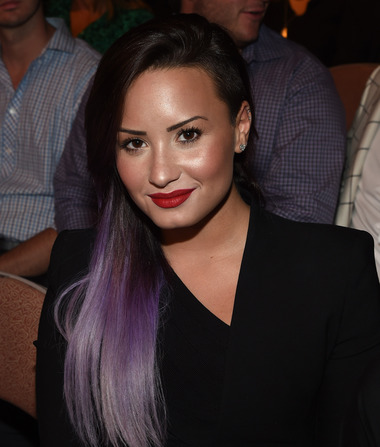 Getty
Lovato is staying healthy and fit by following a mostly raw diet. “I try to eat raw food whenever possible. I don’t eat it all the time just because I’m the type of person that if I do something, if I go all one way, I get burnt out… I’m gluten-free and dairy-free because I’m allergic to them. I just eat vegan and raw as much as possible and it's really changed my body and made me feel better.”

Demi, however, recently splurged on pizza at director Robert Rodriguez’s house, while attending a fundraiser and chatting with President Obama.

The singer laughed, “You kind of can’t turn down pizza that Robert Rodriguez handmade and that you are also eating with the President.” She added, “I got to hear him speak which was really incredible… it was a very surreal night for me.”

Demi said it wasn’t the first time she met the leader of the free world. “I reminded him that we’d met before. I sang at Christmas in Washington. He said, ‘I know who you are. You’re a mega-star, you think I’m stupid?’ I was like, ‘No Mr. President, I’m so sorry, you’re not stupid!’ Then we did talk about his daughters and Michelle, and he was like, ‘You just scored me cool points,’ and I said, ‘You scored ME cool points! Thanks for calling me a mega-star.”

Lovato kicks off her world tour in September.