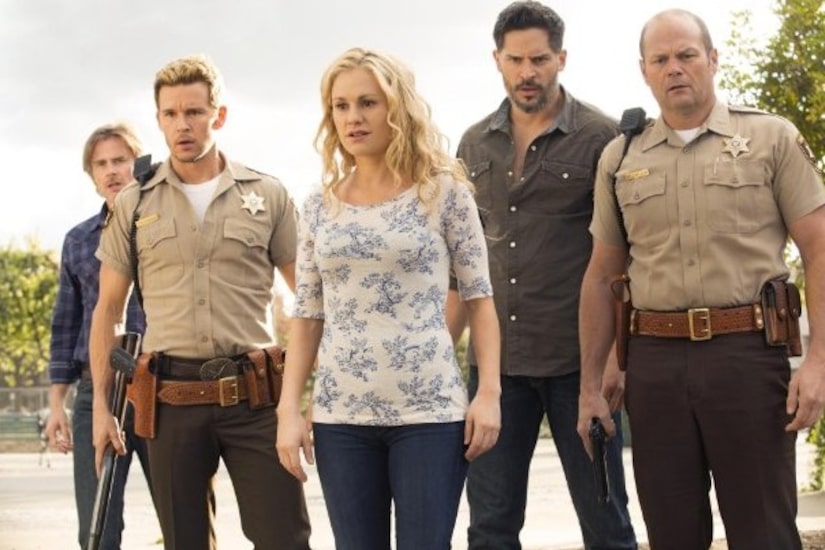 The final season of “True Blood” began in bloody good fashion on Sunday with one of its major characters getting staked within the first five minutes.

Goodbye, Tara. The episode begins where we left off in Season 6 with a gang of Hep-V infected vampires descending upon a peaceful human-vampire mixer outside Bellfleur's (formerly Merlotte's). As they viciously attack, Bill and the other good vampires do their best to fight back, but there are heavy casualties, including Tara, who is killed right away, in front of her mother, Lettie Mae.

Before running off, the Hep vamps also take Arlene, Holly and a pregnant Nicole as prisoners.

Sookie is devastated by the loss of yet another friend and reeling from all the telepathic negativity aimed at her by the denizens of Bon Temps. She's even upset with boyfriend Alcide after reading his mind. He thinks they should have left Bon Temps long ago, and sort of blames Sookie for not wanting to go. No matter. They later have hot make-up sex. Sookie also confronts the town members and tells them not to hate her, but to let her help them. She knows a thing or two about vampires.

Of course, a rescue plan is on. Bill teams up with a reluctant Andy as they try to find the Hep vamp nest in hopes of rescuing Arlene, Holly and Nicole. The feeling is they won't make it in time to save all three, so which one will be killed?

In other developments, new character Vince, the redneck Sam beat in the mayoral race, is gathering a vigilante group to kill all the vampires, infected or not. Jessica forms a bond with half faerie Adlilyn, while Lafayette and Jessica's beau James forge a human-vampire friendship. Jason finally asserts his masculinity with Violet, but somehow that relationship seems doomed.

Tune in to “True Blood” next week to see how things are going to shake out.