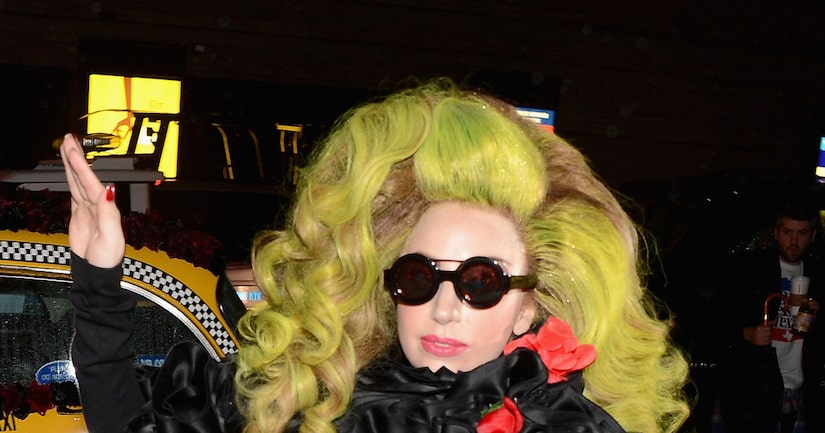 “Extra” special correspondent Angie Martinez was invited to join Lady Gaga on her ArtPop Ball tour, and sat down with Mother Monster for an exclusive one-on-one interview before she hit the stage in Detroit this weekend.

Gaga revealed that when she’s not onstage, she's pretty much like the rest of us. “I do all sorts of normal things, I mean probably the same as everyone, I go see my family, go to my dad’s restaurant in New York, I have a new puppy, I play with her.”

Gaga, who has been posting lots of pics of her French Bulldog Asia, admitted she sometimes walks the pup while in disguise.

“I always feed her, I sleep with her every night, I take her out to go potty and it’s really sweet because she is like my little friend.”

The singer is also spending time with boyfriend Taylor Kinney, laughing that he is “a prankster” when asked about the recent photo of him pinching her behind.

Does she see marriage in the future? “Could be, who’s to say… I don’t have my life planned that way, I am actually more than ever truly trying to live in the moment and really just enjoy this time right now with you, this time with my team, with my new puppy, with Art Pop.”

Gaga loves being back on tour after having to quit last year's tour due to hip surgery.

Mother Monster said, “The best part of my day is when I’m on stage performing for the fans, I really love Art Pop so to perform it live, see them singing, dancing is like the best thing ever.”

Gaga has to work extra hard to avoid injuries. “Every day I have to do a totally different thing with my body than I used to, to keep it really healthy, but it feels really good.”

She confirmed that she’s singing live in all of her shows, saying, “I don’t think it’s cool to lip sync. I’m not judging if people do because it’s everybody’s own style of what they decided to be, the type of artist they will be, but I think if you pay money for a ticket to see a show the artist should f**king have some pipes and sing their records for you.”