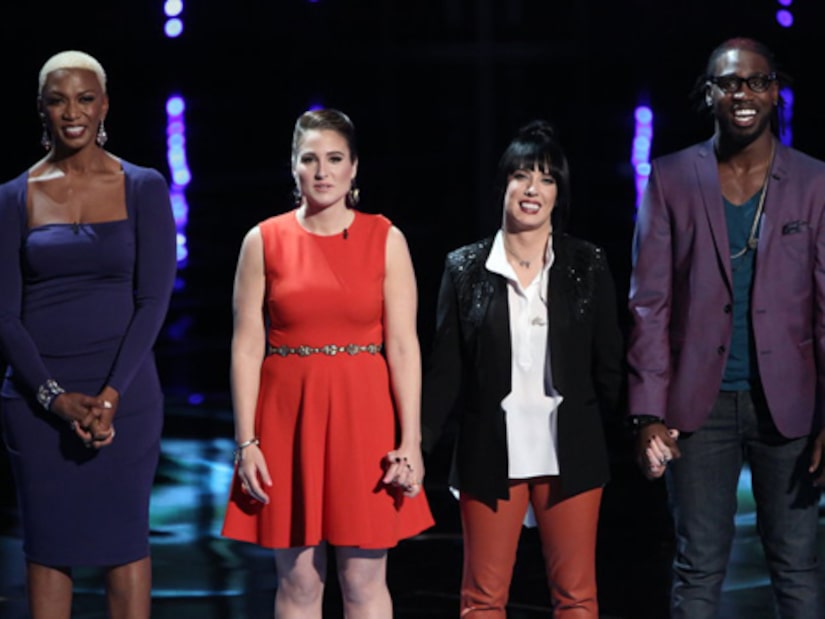 The latest "Voice" results show was the most shocking one ever! The triple elimination meant saying goodbye to powerhouse Sisaundra Lewis, singing barista Delvin Choice and country soprano Audra McLaughlin.

The bottom four, including fellow contestant Kat Perkins, had to sing for their lives just before the instant save on Twitter. Ultimately, Kat from Team Adam was saved.

We caught up with Sisaundra, Audra and Delvin backstage to find out what they have in store for the future. Here is what we found out:

Sisaundra Lewis: Team Blake
Save Me Song: Aretha Franklin's “You Make Me Feel Like a Natural Woman”

How She Got Hooked on Singing: “The stage feels like my home. When I'm there it is the most comfortable place for me. Growing up being bullied, growing up as the kid who worked in the groves, [I found that] people always accepted me when I stepped onstage… if I sang, people didn't see all those things about me. It erased the adversity I had to deal with.”

Dreams Don't Have an Age Limit: “I don't think age was a factor [in my elimination]. I think the world embraced me more than anything on an equal level, but I think younger people control social media… I just want to say [to anyone thinking about pursuing their dream] go for it. I really don't see age as a restriction to anything. I don't believe in boundaries in any way.”

What's Next? “After being on a stage like 'The Voice' and having access to so many millions of people weekly, I think many doors will open up. I don't know exactly what is next. I know God has amazing things in store for me and I'm ready to embrace that. I am definitely going to record an album and I definitely want to perform on a regular basis.”

Contest! Win a Trip to L.A. and Tickets to 'The Voice'!

Save Me Song: The Band Perry's “Done”

Ode to Blake: “Blake has always had confidence in me and that was the main thing that helped me go out there and leave it all out there on the stage, and put my heart out there. You can't ask for anything better than having Blake Shelton believe in you… he just really truly cares about people.”

How She's Grown: “It has honestly taught me to be stronger. I have always been so hard on myself. This whole experience has helped me have fun and just enjoy the moment and what I've accomplished.”

What's Next? “I just know that I'm not going to quit, because I don't quit, I never have… I would definitely like to cut a country album… I love Martina McBride. I definitely want my first album to be like her very first album. I love ballads and inspirational songs that touch people's hearts.”

Who He's Rooting For: “You all should know by now, Kat is not only my teammate but she is the epitome of a friend and she deserves this more than anybody. Number one, she not only is the greatest singer in this competition, but she possesses everything it takes to be a star. Even at the hotel she looks like a star… when they called her name it was like they called Kat Delvin Perkins Choice… as long as she's here I'm still here.”

What's Next? “I'm going to record as many records as I possibly can and try to work with some artists that I've been wanting to [collaborate with]… I'm going to find a way to go to Brazil and I'm going to relax… the best is yet to come for Delvin.”