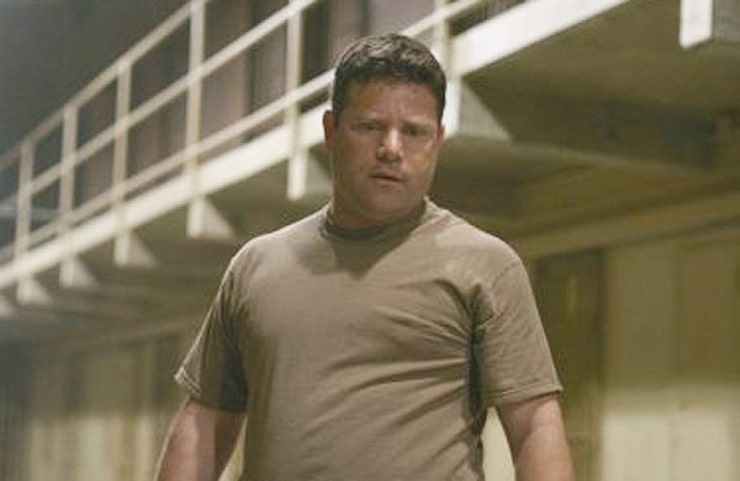 The indie drama “Boys of Abu Ghraib” is a tense film that follows an American soldier (Luke Moran) deployed at Iraq's Abu Ghraib, who finds himself behind the walls of the infamous prison.

ExtraTV.com spoke with actor Sean Astin about the film's message and his own thoughts about the state of war. He stars in the film as a hardened guard at Hard Site.

The prison came under scrutiny in the early 2000s when several American soldiers were convicted of human rights violations -- including torture, rape and murder -- against Iraqi prisoners held there.

Astin began, “I'm a really engaged citizen and political creature, very involved in the military service. I've also been called a lefty, liberal Democrat, and I'm not going to push back on that, either. Those things are usually considered mutually exclusive, but they are not for me. My point is that my eyes are wide open and I pay attention, so when this incident happened, and came to light, and is continuing, I have very strong feelings about it.”

Of his character, Astin explained, “I was prepared to put myself through a really intense emotional and psychological immersion into this world, putting myself in this place. Imagining a lot. I think the one quality my character is supposed to bring to the film is coarseness. Not villainy, just a really coarse relationship with the world around him. He's been there a long time. He just wants to listen to his music, smoke his cigarettes and do the job. He doesn't take much pride in hurting people but he also doesn't really care, you know?”

The “Lord of the Rings” actor was also impressed with first-time filmmaker/star Luke Moran. “Luke knew what he was doing, smart, good ideas and knew how to get them. The issue [of torturing POWs] isn't solved yet. Luke wanted to tell a story and he's a young filmmaker and chose this environment. The events weighed heavy on him and he identified with soldiers. He's a very promising guy and fun to work with because he knew what he wanted and was calm and collected.”

There was a sense of camaraderie between the actors on set. “It was instantaneous,” said Astin. “The painful thing, though, after playing the character and being at the Hard Site for two hours, I found that when the actors [playing the Iraqi prisoners] were dressed in their orange garb, I looked right through them. I didn't see people anymore, just orange garment and wondering where I could grab it to throw them down. I didn't see them as human beings. Then we all go out for dinner later and I'd be mortified at how easy it was to get into that character and not even think twice about it.”

Astin marveled, “If these feelings happen to us in a span of two hours of shooting, imagine month seven of being in the desert, eight, 10 hours a day, with mortar shells raining down on you and these prisoners being brought in and being told they did it. It's not too hard to believe that I or anyone else wouldn't be abusive if you thought it was important to protect yourself. It's horrifying to think they did it for sport, but it shouldn't be shocking.”

How did Astin unwind after making such a tough movie? “I've never had night terrors before, but during the research period, I starting waking up in a sweat. Almost screaming. I was sort of fine during the filming of it because you are in the hunt, so to speak. Then afterwards, it took a couple of weeks before I stopped thinking about it constantly. But I think when we make movies for people to experience we should go through that ourselves. Hopefully if there's a moral compass, it's meaningful for other people. That's how you process it. You remind yourself that it'll be an emotional experience for people and provoke conversation and thought.”

Astin summed things up. “All through human history this is how people have behaved but what's supposed to set us apart as Americans is if we learn about something like that, we can fix it… at this moment, we should lead by example and set a tone that we won't do this under any circumstances. Maybe in doing that, you hold the moral high ground and you can help shape the fate of nations so you don't go to war with them. It's not just about saving the 50 to 100 people being tortured, it's about saving hundreds of millions of people because you are leading your government in a way that creates peace around the world.”

For more of Sean's political views and ways to express yours, tune-in to his radio show on Vox Populi Radio.

"Boys of Abu Ghraib" is currently playing in theaters and is available of VOD.