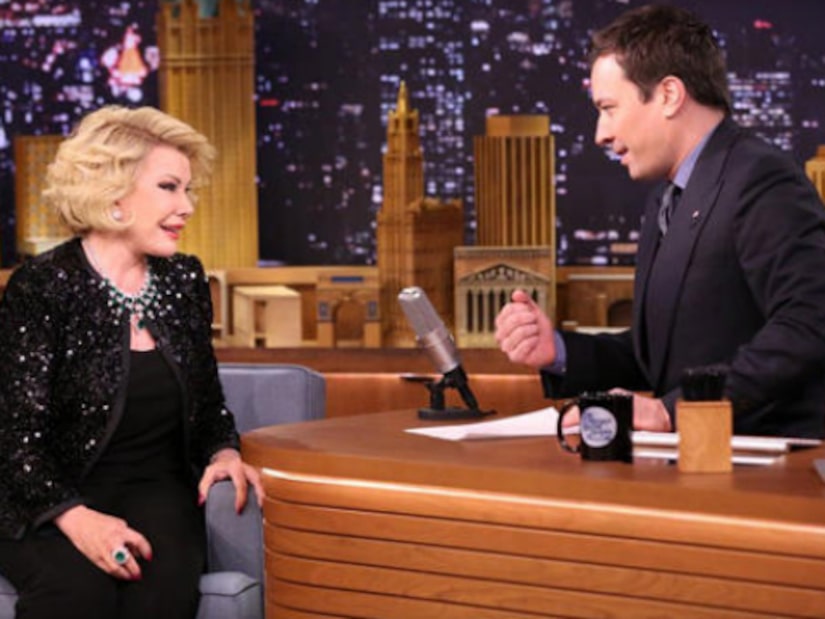 Johnny Carson wouldn’t like this… Jimmy Fallon has lifted the “Tonight Show” ban on Joan Rivers after 28 years!

The 80-year-old comedian was a guest (along with Russell Crowe) on the show Thursday night. She joked with Jimmy, "The last time I was on the show, Melissa was in diapers. Now, I'm in diapers.”

The Carson vs. Rivers feud is a famous one. Joan earned a permanent guest-hosting spot on the “Tonight Show” during Johnny’s reign as host. When she decided to leave for her own late-night show on FOX, Carson was furious. Leno upheld the ban.

This is technically Joan’s second appearance on Jimmy’s “Tonight Show” (she made a cameo on the debut), but the first time she has been interviewed.

Joan Rivers Flees Party After Getting Caked in the Face!

As usual, Joan didn’t hold back and hilarity ensued. Fallon and Crowe could only shake their heads. Watch!

“Extra’s” AJ Calloway caught up with Joan outside 30 Rock in NYC on Friday. She told AJ, “Jimmy Fallon said this is stupid, come on back… I felt amazing going back,” adding that she made a vow not to change her underwear until she was on the “Tonight Show” again!

Rivers admitted she doesn’t know what the feud with Johnny Carson was about. “I don’t even know what the stupid feud was about, he was angry because I left the show to do my own show.”

Joan continued, “Everything turns, everything moves on and I managed to survived.”