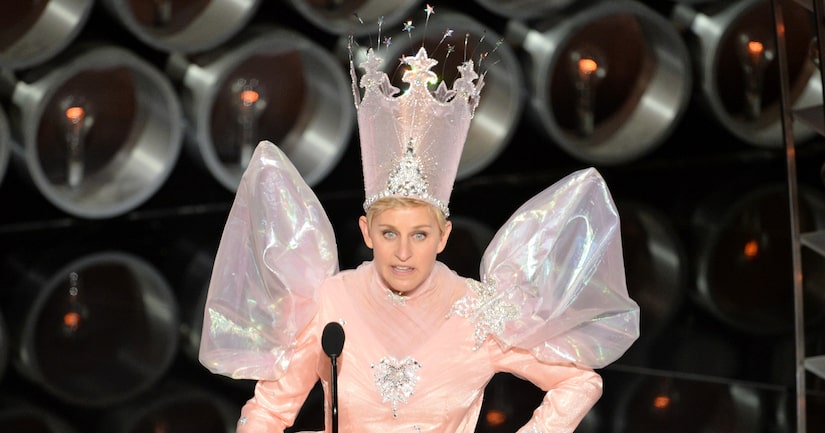 Host Ellen DeGeneres took center stage as the 2014 Oscars were handed out… and "Extra" was there to give you running commentary of Sunday night's festivities.

Pics! Our Favorite Moments from the Oscars Show

See the complete list of 2014 Oscar nominations and winners!

11:41PM: The exquisite Cate Blanchett wins the Oscar for Best Actress, and her acceptance speech is classy.

11:33PM: We are getting down to wire... the lovely Angelina Jolie gives a touching tribute to her co-presenter Sidney Poitier, and the two announce Best Director Alfonso Cuaron!

11:16PM: And Best Original Song goes to... "Let It Go"! The married songwriters gave an entertaining and short speech.

11:13PM: Presenter Jamie Foxx messes a little with his co-presenter Jessica Biel, as they announce the winner for Best Score... "Gravity."

10:53PM: Presenter Glenn Close introduces the In Memoriam segment, which is always sad, but this is followed by Bette Midler singing her hit song "The Wind Beneath My Wings" from the tearjerker "Beaches." Get the tissues.

10:46PM: More hero talk! "Captain America" Chris Evans introduces clip of our most popular heroes, and yes, The Avengers are in there. So is James Bond, the Terminator, Harry Potter, Luke Skywalker and others.

10:33PM: Presenter Whoopi Goldberg is wearing ruby slippers in tribute to "The Wizard of Oz"... so that's why Liza Minnelli is in attendance. Then, Whoopi introduces singer Pink, who sings the hell out of "Somewhere Over the Rainbow." Well done. Ellen appeared on stage right after in her Good Fairy outfit. "Did I miss it?"

10:25PM: Cool! I didn't know the Academy of Motion Pictures and Sciences was building a movie museum, to open in 2017. Thanks for showing us some of the design graphics, AMPAS President Cheryl Boone Isaacs.

10:21PM: Ellen brings in the pizza! Hands out some tomato pies to Julia Roberts, Meryl Streep, Angelina Jolie, Harrison Ford. Aw, Jared Leto gives a piece to his mom. But who's going to pay? Ellen thinks it should be Harvey Weinstein. "No pressure, millions of people watching. Do what you think is right."

10:18PM: Who's going to win Best Supporting Actress? That would be Lupita Nyong'o for "12 Years a Slave." Did you see her clip? I mean, wow. She gave a very thoughtful and emotional acceptance speech.

10:02PM: Ellen just took the most epic selfie EVER with some of Hollywood A-listers! See it! 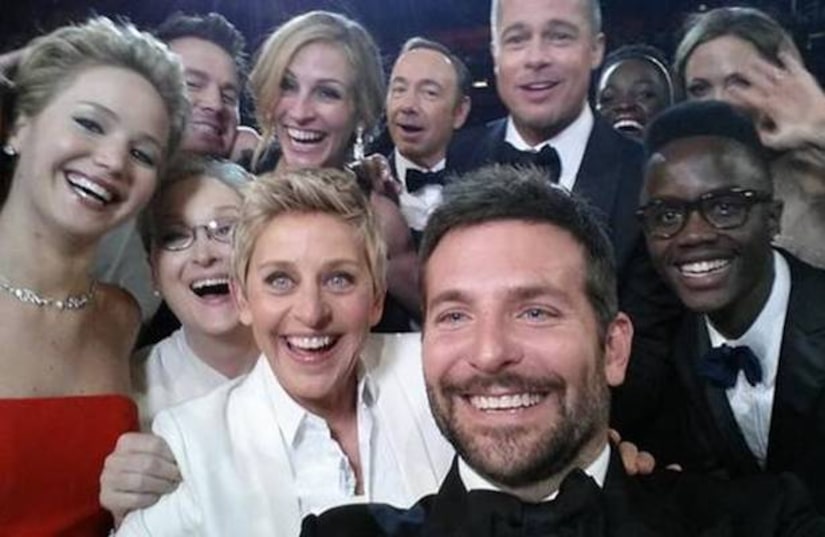 9:55PM: Brad Pitt introduces the band U2 as they sing their Best Original Song nominee "Ordinary Love" from "Mandela: Long Walk to Freedom."

9:54PM: Ellen has changed to an all-white tux... and the audience appreciates it. Woohoo!

9:51PM: Tyler Perry introduces clips for Best Picture nominees "Nebraska," "Her" and "Gravity." Man, those were all such great movies.

9:50PM: Checking them off the list... Best Foreign Language Film goes to "The Great Beauty" from Italy. The filmmakers... very Italian.

9:40PM: Ah, Kevin Spacey... takes the stage as a presenter and says a few words as his "House of Cards" character Frank Underwood. Love it. He then becomes Kevin again to pay tribute to the Honorary Oscar winners.

9:37PM: Bradley Cooper presents Best Documentary, which goes to "20 Feet from Stardom." The film is about backup singers, and one of the film's subjects accepts in song. Appropriate.

9:23PM: Ellen moves around in the audience quite effectively, even as a seat filler when presenter Zac Efron introduces the performance of "The Moon Song" from the movie "Her."

9:17PM: Ellen: "She's only a stranger to people who don't know her... here's Sally Field!" Norma Rae herself presents a clip of the everyday heroes in film.

9:10PM: Wow, Kim Novak! She presents with Matthew McConaughey for Best Animated Short. The Oscar goes to "Mr. Hublot" and the French filmmakers do their best in their acceptance speech.

8:47PM: Presenter Jim Carrey calls out his hero, Bruce Dern, and nails an impersonation! In the keeping with the 2014 Oscars theme of about cinematic heroes, Carrey introduces a clip of animated heroes. Ellen quips afterwards, "Anyone think that was a little light on 'Finding Nemo?'"

8:32PM: Host Ellen DeGeneres comes on the stage, zingers a-blazin'! Here's some of the best:

-- "L.A. has had a tough couple of days. It was raining. We're fine, thank you for your prayers."
-- On recognizing first-time nominees June Squibb, Lupita Nyong'o and Barkhad Abdi, a Somalian and knows a lot about wine. "Who's the wine captain now?"
-- Pointing to Liza Minnelli, "And the best impersonation of Liza Minnelli! Good job, sir."
-- Ellen thinks of everyone as a winner. "Well, maybe not everyone, just the ones that have won."
-- Makes fun of Jennifer Lawrence's klutziness, tripping on the way up to accept the award last year and then falling on the red carpet this year. "If she wins tonight, can we just bring her her Oscar? I'm afraid..."
-- Calls out Meryl Streep and all her Oscar nominations and all the money that goes into attending the award show. "I don't think she can afford it anymore!"
--Says Jared Leto is definitely the prettiest one there tonight. Matthew McConaughey, too, but he's a "dirty pretty." Also says "Dallas Buyers Club" is a cautionary tale about having sex at a rodeo. "Speaking of having sex at a rodeo, Bruce Dern is here!"
--Looking at Jonah Hill, nominated for his turn in "The Wolf of Wall Street," Ellen says, "You showed me something I haven't seen in many, many years." Get it? The penis shot? Ok, just wanted to make sure.