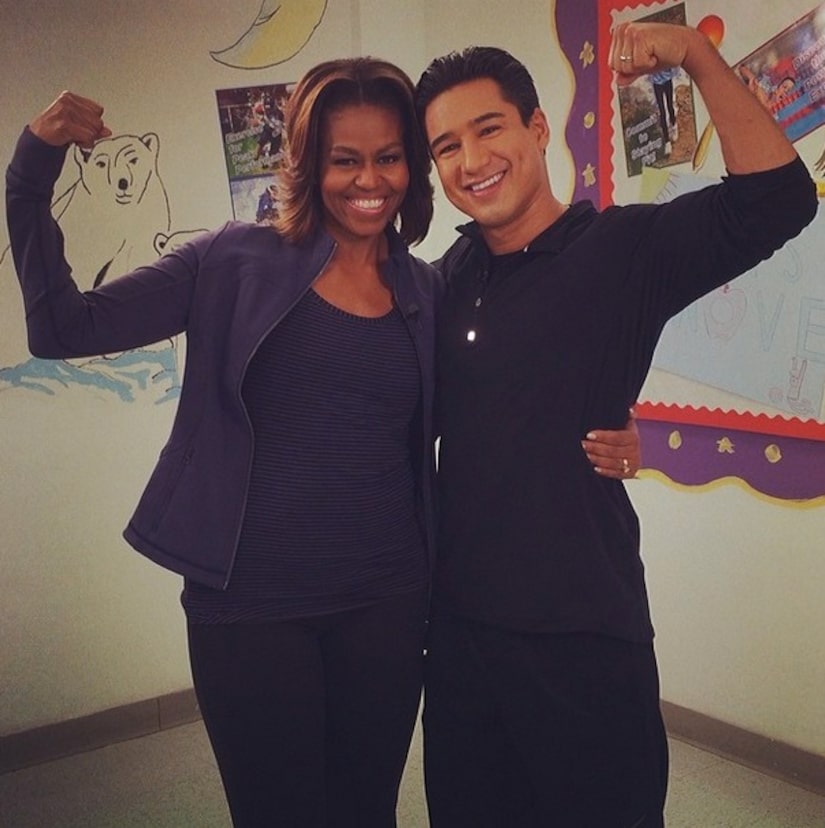 “Extra’s” Mario Lopez joined First Lady Michelle Obama in Miami for an exclusive interview, as she continued to spread the word about her Let’s Move initiative.

Celebrating the 4th anniversary of Let’s Move, which fights childhood obesity, the First Lady told Mario what she does to stay fit. “I like to mix it up. I like to play a little tennis, lift weights. I do a little boxing when I can. I try to do a little yoga.”

Mrs. Obama did admit she occasionally enjoys giving in to some guilty-pleasure foods. “Salty. I like salty chocolate. I like that combination, but I love French fries. I’m a sucker for French fries.” And the President’s preferred snack? “Salty nuts. He loves any kind of nuts.”

She offered advice for the next First Lady or Bill Clinton should he become the first gentleman. “My advice would be to be who you are. That's the beauty about being the spouse of the world leader is that you can pick and choose your issues.”

The First Lady also revealed what life after the White House may look like. “We’re going to see where the kids are, because by that time Malia will be in college, if you can believe that, and Sasha will be in her sophomore year in high school. We're going to let her make the choice and see where she’s most comfortable, because they've made the sacrifices for us to be here already. We’re going to play it by ear.”

Family always comes first and foremost for the Obamas. “The President and I try to make sure with all we have on our plates that our girls are front and center. Because we believe that we need to do that as a nation for all of our kids.” Telling Mario, “As you very well know, as a father of young ones, doing your part as well, being a good husband.”

Mario asked, “What do you miss the most about civilian life?” She responded, “The anonymity, being able to walk outside my door without security and staff and three cars. There is something to be said for walking around where nobody knows your name, but it has been a privilege and honor to serve.”

For more information and ways to help the Let's Move campaign, visit the website!