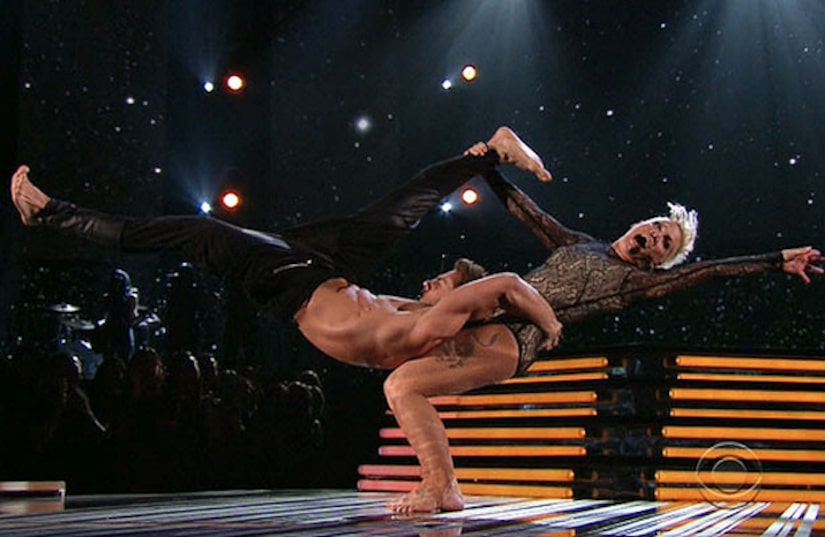 Host LL Cool J and a bevy of great performers, including Katy Perry and Beyoncé, took center stage as the 2014 Grammy Awards were presented… and we were there to give you running commentary of Sunday night's festivities!

11:39PM: The Grammys end with a performance by Nine Inch Nails, Queens of the Stone Age, Lindsey Buckingham and Dave Grohl!

11:35PM: Daft Punk wins again! They pick up Album of the Year for "Random Access Memories." Wait, did Taylor Swift think she won for a second?

11:20PM: It's still going, folks! Taking a pause to say goodbye to those artists we lost last year. Billie Joe Armstrong and Miranda Lambert perform "When Will I Be Loved" to pay tribute to Phil Everly.

11:06PM: Queen Latifah introduces Mackelmore & Ryan Lewis, who perform their poignant song, "Same Love," featuring Mary Lambert, as 33 diverse couples tie the knot at the Grammys. The multi-nuptials are officiated by the Queen herself. Very moving moment. The hip-hop duo is then joined by Madonna, who sings "Open Your Heart." What's with the cane? 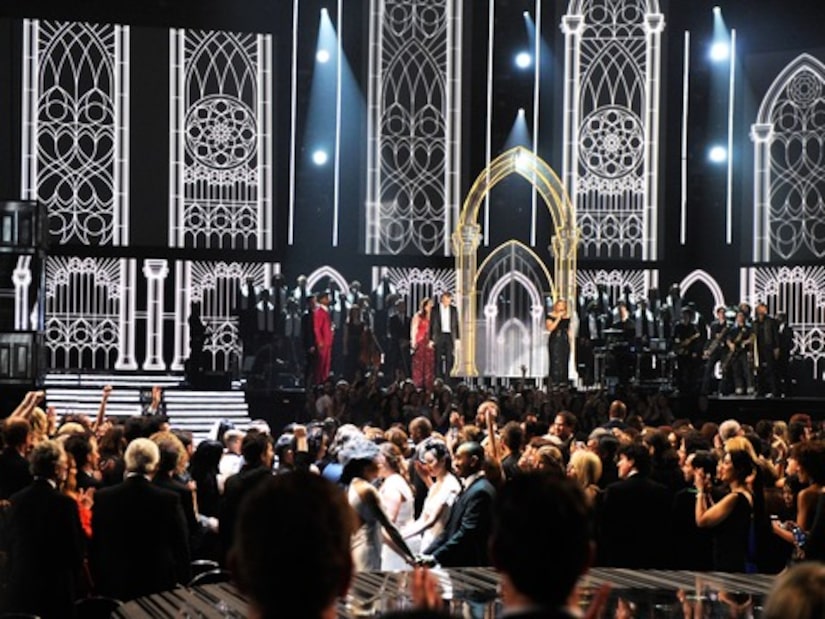 10:59: Daft Punk and Pharrell Williams win Record of the Year for "Get Lucky"!

10:57PM: Presenter Steven Tyler's impromptu rendition of co-presenter Smokey Robinson's "You Really Got a Hold on Me" is fantastic!

10:50PM: Jared Leto, a rocker himself with his band 30 Seconds to Mars, pays tribute to Lou Reed, who died last year. Then he introduces the next performance, a collaboration with Metallica and pianist Lang Lang.

10:36PM: Presenter Cyndi Lauper has a little trouble with her teleprompter, but she introduces a great collaborative performance -- Sara Bareilles and Carole King, singing a mashup of King's greatest hits and Bareilles' "Brave."

10:25PM: Here's a performance I'm looking forward to: Daft Punk, Pharrell Williams and Stevie Wonder sing a "Get Lucky" mashup! Totally killed it! By the way, Pharrell's hat has its own Twitter account.

10:15PM: They are pulling out all the movie stars tonight. Jeremy Renner introduces a performance by Willie Nelson and Kris Kristofferson. Then they are joined by Merle Haggard and Blake Shelton. Can you say good old boys?

10:01PM: Paul McCartney takes the stage for a performance... and guess who joins him? That's right, Ringo Starr, playing the drums! Everyone at the Grammys looks thrilled for the mini Beatles reunion.

10:00PM: Julia Roberts makes an appearance to introduce a tribute to The Beatles that will air on CBS February 9, and then introduces... [look above]

9:51PM: Following that incredible rap and rock collision, we take a little country music break with newcomer Kacey Musgraves. I wonder if she is saying to herself, "How do I follow that?"

9:45PM: Kendrick Lamar and Imagine Dragons join forces for an energetic mashup performance! Lots of censoring for this one... thanks to Lamar's rap. Lamar is going to have to take a nap after that performance. #TheGrammys tweets, "Social media has spoken! kendricklamar and imaginedragons is the performance of the night so far!"

9:35PM: Presenter Jamie Foxx is hilarious, talking about all the shenanigans backstage. Justin Timberlake and Jay-Z win Best Rap/Sung Collaboration for "Holy Grail." JT is not in attendance but Jay-Z accepts, telling daughter Blue Ivy, "Daddy's got you a gold sippy cup!" 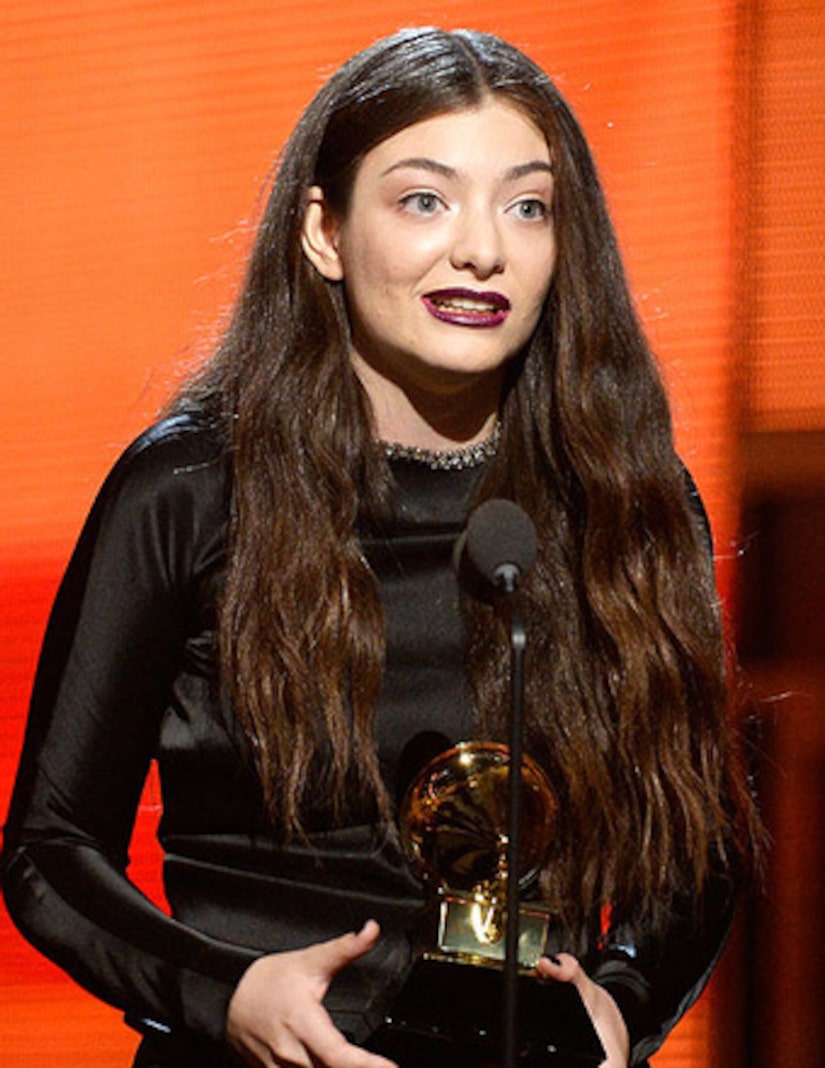 9:16PM: Pink is a frustrated Cirque du Soleil performer. She twirls in the air again, like she did at the Grammys last year, singing "Try." Then she tussles with a very hot dancer in a dramatic moment. Fun frontman Nate Ruess then joins Pink (who puts on a skirt) to perform "Just Give Me a Reason."

9:05PM: Ah, the lovely Taylor Swift takes the stage to play the keys and soulfully sing "All Too Well." Maybe the hair shaking is a little unnecessary but a nice performance nonetheless.

8:58PM: John Legend elegantly plays the piano, singing his song "All of Me." Clever camera angles shows his lovely wife Chrissy Teigen sitting in the audience, raptly listening to him.

8:43PM: Robin Thicke and Chicago do a medley of Chicago's greatest hits! Bringing it back, old school. Then, Thicke blurs the lines... without a twerkin' Miley Cyrus in sight. Well done, boys.

8:32PM: Steve Coogan is at the Grammys? He isn't there to talk about his multi-Oscar nominated film "Philomena" because that would "tacky," but rather to introduce Katy Perry performing a creepy "Dark Horse" rendition with Juicy J. Ohhh, there's pyrotechnics, too!

8:29PM: Daft Punk wins Best Pop Duo/Group Performance for "Get Lucky." Pharrell Williams accepts the award because the other guys are dressed as robots.

8:11PM: Presenter Anna Kendrick says she's a little sad that she and fellow co-presenter Pharrell Williams weren't able to perform their sexy rendition of "Drunken Love" because Anna got a cold. Williams reminds her that at least Bey and Jay Z killed it. Anna, "Yeah, whatever."

8:07PM: Host LL Cool J hits the stage. "Music has the power to bring people together like no other... maybe not as together as Beyoncé and Jay Z, but..." He gives a powerful opening speech about how music has brought him here today, and then calls out many of the artists in the audience for how music brought them all there. He's Cool.

8:05PM: Hubby Jay Z joins Bey onstage, doing his rap thing. The two get very comfortable with each other. They are definitely the music biz's hottest couple. 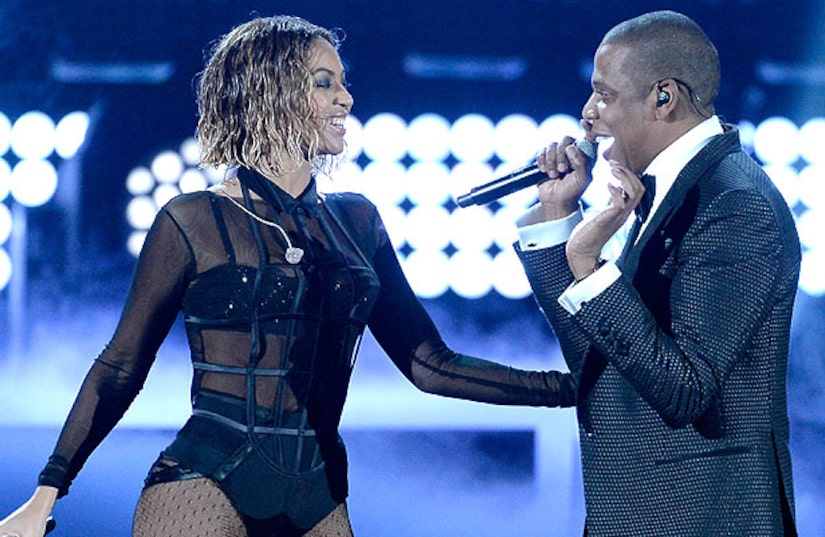