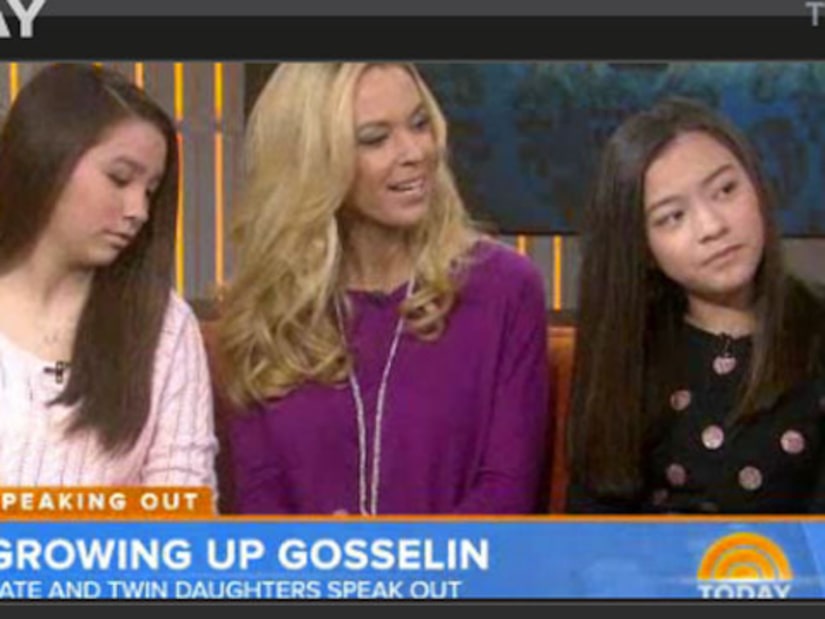 Reality TV mom Kate Gosselin took to Twitter to explain why her 13-year-old daughters, Cara and Mady, completely clammed up while on the “Today” show.

In the viral video, the girls embarrassed their mom with some serious teen 'tudes, and their refusal to answer “Today” co-host Savannah Guthrie's simple questions like, “How are you doing?”

Radar reports that Kate asked Cara after the interview why she refused to speak and the girl just shrugged, causing the reality show mom to roll her eyes.

On Twitter, however, Gosselin seemed nonplussed, tweeting, “Thanks to @TODAYshow for having Cara, Mady and me on the show today! 1st live interview can render even the gabbiest girls speechless… I'm proud of them, taking this opp! They were so excited but caught off guard by live tv!”

A few of Gosselin's followers questioned her sincerity. One criticized her tweet, writing, “Sad that you're in damage control already.”

Kate quickly replied, “No damage done. They wanted to do interview with me, I said 'go for it' #morelifeopportunites #proudmomnomatterwhat."

Another wrote, “You could tell they were scared of saying the wrong thing, that's why they kept looking at you!”

Again, Gosselin quickly replied, “There were no right or wrong answers. They just had a case of "stage fright" #notactors.”

The embarrassing “Today” performance came after the girls recently gave a candid interview to People magazine denying reports they had been “damaged” by spending much of their childhood on the reality TV show “Jon and Kate Plus 8.”

Dad Jon Gosselin later told TMZ the whole thing was "horrible," adding, "I'm going to handle this as a family matter. I don't want to affect the children anymore."

Cara and Mady Gosselin are the eldest in the former “Jon and Kate Plus 8” family. Their sextuplet siblings are now 9 years old.