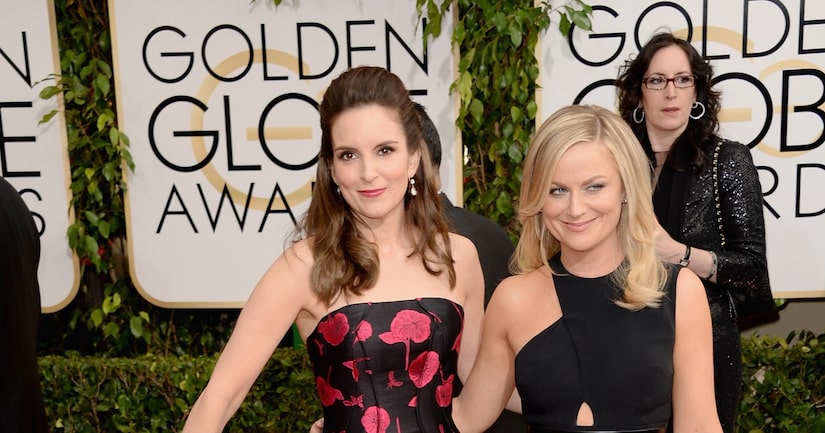 Hosts Tina Fey and Amy Poehler took center stage tonight as the 2014 Golden Globes were handed out… and we were there to give you running commentary of Sunday night's festivities.

11:00PM: Tina and Amy say goodnight. Tina: "This is the beautiful mess we'd hoped it would be!" Amy: "And I got to make out with Bono!" Well played, Golden Globes, well played.

10:57PM: "12 Years a Slave" wins the last Globe of the evening, Best Drama! Director Steve McQueen accepts with grace. If you're thinking about your Oscar ballots, here's a great start!

10:49PM: Wow, Matthew McConaughey gets the big win for Best Actor in Drama for his stunning portrayal in "Dallas Buyer's Club"! He's such a cool Texas dude, especially thanking his lovely wife, Camila.

10:46PM: Cate Blanchett win Best Actress in a Drama! "I went to Magic Castle with my children, and I thought that was weird." No, seriously, she gives a thoughtful, intelligent speech. The ending was the best, "Can everyone hear this music or do they think we are just talking really fast because we are having a panic attack?"

10:45PM: Tina and Amy introduce presenter Leo DiCaprio: "Like a supermodel's vagina, let's give a warm welcome to Leonardo DiCaprio."

10:27PM: Jennifer Lawrence announces Leonardo DiCaprio as Best Actor in Musical or Comedy for "The Wolf of Wall Street." He graciously thanks his fellow nominees, especially Bruce Dern. He also thanks Martin Scorsese for letting him stalk the director to make the movie.

10:20PM: In another surprise, "Brooklyn Nine-Nine" wins for Best Comedy Series. Maybe we start tuning into the show.

10:16PM: Ah, and so a real indicator to the Oscar race is announced... Alfonso Cuaron wins for Best Director for his superb "Gravity."

10:02PM: Time for the Cecille B. DeMille Award, which goes to Woody Allen. He's not there, of course, so it's accepted by good pal and former GF Diane Keaton. Are you all thinking about "Annie Hall," right now? I am.

9:58PM: Amy Poehler finally wins for Best Actress in a Comedy Series for "Parks and Recreations"! She makes out with Bono. Well played, Amy.

9:45PM: Michael Douglas wins Best Actor in a Mini-Series or TV Movie for his turn in "Behind the Candelabra." Again, not a big surprise.

9:34PM: Presenters Seth Meyers and Julie Bowen tell the HFPA they'll do just about anything to snag a nomination in coming years. Getting that out of the way, they announce the winner for Best Actor in a Comedy Series... Andy Samberg for "Brooklyn Nine-Nine." He ad-libs the speech because he's totally taken by surprise, as is the rest of us.

9:28PM: Presenter Emma Thompson comes out holding a martini to announce nominees for Best Screenplay. Even if she's playing drunk, she's hilarious. Spike Jonze wins the award for his brilliant "Her." Don't cut him off, NBC!

9:21PM: Jared Leto wins Best Supporting Actor for playing a transvestite with AIDS in "Dallas Buyer's Club." He's a classy dude. "To the Rayons of the world, thanks for the inspiration."

9:20PM: Jim Carrey takes a crack at Shia LaBeouf ("So young... and SO wise") while introducing a clip for "American Hustle." Nice job, Jim, nice job.

9:18PM: Robin Wright wins Best Actress in a TV Drama Series for her fantastic performance in "House of Cards." Oops, she almost has a side-boob malfunction but shows a pastie instead... and she forget to thank new fiance Ben Foster.

9:14PM: Back from break... where's Amy and Tina? Oh wait, there they are. Kyra Sedgwick and Kevin Bacon introduce their daughter Miss Golden Globe, Sosie Bacon, which leads Tina to introducing her son, Randy, from a previous relationship. It's Amy, of course, playing a sullen teenager. "I hate you and so does Jacqueline Bisset," "he" says, stomping off the stage.

9:05PM: Pregnant Olivia Wilde introduces a clip to "Her.' Wow, she wins best baby bump look of the evening.

9:02PM: Jon Voight wins Best Supporting Actor in a Mini-Series, TV Movie or Series for his scary turn in "Ray Donovan." He stumbles on names, "I'm as nervous as everyone else!"

8:55PM: "Ordinary Love" from "Mandela: Long Walk to Freedom" wins Best Song. The oh-so-cool Bono and U2 give talk about apartheid and Mandela in their acceptance speech.

8:48PM: "Philomena" star/writer Steve Coogan introduces a clip to the film with the real Philomena by his side. Judi Dench isn't there. She never goes to these things.

8:37PM: Presenters Jonah Hill and Margot Robbie look like deer caught in the headlights when their prompter shows them the wrong info. They are handed a piece of paper so they can introduce a clip to "The Wolf of Wall Street."

8:35PM: Amy and Tina thank the Hollywood Foreign Press Association for putting on this lovely event... and then read off some ridiculous names.

8:28PM: Matt Damon introduces a clip from "Captain Phillips" -- "It's the garbage man who didn't bring his glasses. Fantastic!"

8:25PM: Elisabeth Moss finally wins an award but not for "Mad Men." It's for Best Actress in a Mini-Series or TV Movie for her performance in "Top of the Lake." Don't know the show? Check it out on Sundance Channel, it's worth it!

8:24PM: "Behind the Candelabra" wins the Best Mini-Series or TV Movie. Producer Jerry Weintraub accepts the speech. No surprise.

8:19PM: Jacqueline Bisset wins the Globe for Best Supporting Actress in a Series, Mini-Series or TV Movie for "Dancing on the Edge" and she can't really pull herself together to give a speech. She finally manages a few words but by then it was too late. She'll be trending soon.

8:15PM: Jennifer Lawrence wins for Best Supporting Actress for her turn in "American Hustle." She thanks director David O. Russell and can't understand why she's so nervous. Luckily, there are no wardrobe malfunctions.

--Tina on explaining "Gravity": "George Clooney would rather float away in space and die than spend time with a woman his own age."
--Amy to Matt Damon, "Matt on any other night in any room you would be a big deal. But tonight, you're a basically a garbage person" and then to director Martin Scorsese, "Hey, Marty, Bobby wanted me to to tell hi. And the other Bobby. And Danny says hi. Bobby, Bobby and Danny say hi."
--"Meryl Streep was so good in 'August: Osage County' proving that there are great parts for Meryl Streeps over-60!"
--Amy about herself: "Oh yeah, Amy is a straight-up bitch!"
--The women call out friend double nominee Julia Louis-Dreyfus for sitting in the "film section," since Dreyfus was nominated for her work in "Enough Said," along with HBO's "Veep." Panning to Julia, she's got dark shades on, smoking an e-cigarette and won't let Reese Witherspoon, sitting next to her, take a selfie pic with her.
--Tina & Amy praise Matthew McConaughey for losing 45 pounds for his role in "Dallas Buyer's Club" or, as Tina says, "what actress call being in a movie."
--Amy says after watching "12 Years a Slave," she'll "never look at slavery the same way again..." but before Tina can get Amy to clarify, Amy is already onto the next subject.
--Amy: "'Masters of Sex'... my degree from Boston College," high-fivin' her pal. Tina: "'The Blacklist,' who is invited to my hotel room tonight. Oh yeah, Somali pirates, I'm the captain now."