Stars Dakota Johnson and Jamie Dornan are already steaming up the lens on the set of their erotically charged film “Fifty Shades of Grey,” but could that sexual chemistry be causing trouble in Johnson’s personal life?

According to Star magazine, Johnson’s real-life boyfriend, actor Jordan Masterson, is not very happy with the situation. “The attention she is getting bugs him,” the source claimed.

Johnson is playing Anastasia Steele in E.L. James‘ screen adaptation, who has a torrid affair with the dashing Christian Grey, played by Dornan, and there is talk they might release an NC-17 version, along with an R-rated version, to appease fans. 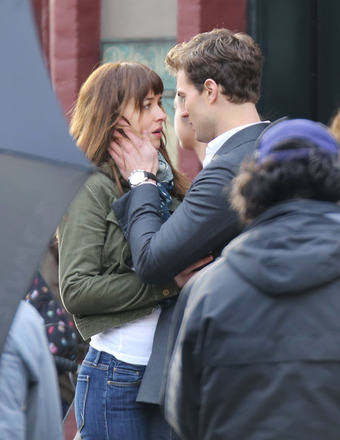 Producer Dana Brunetti told Collider, “What we’re hearing is that [the fans] want it dirty. They want it as close to the book as possible. We could release the R-rated version, which everyone will enjoy, and then for those fans who want to get a little gritty we could release an NC-17 version a few weeks later.”

Chris Cuomo’s Best Advice for Battling COVID-19, Plus: He Shares… 2