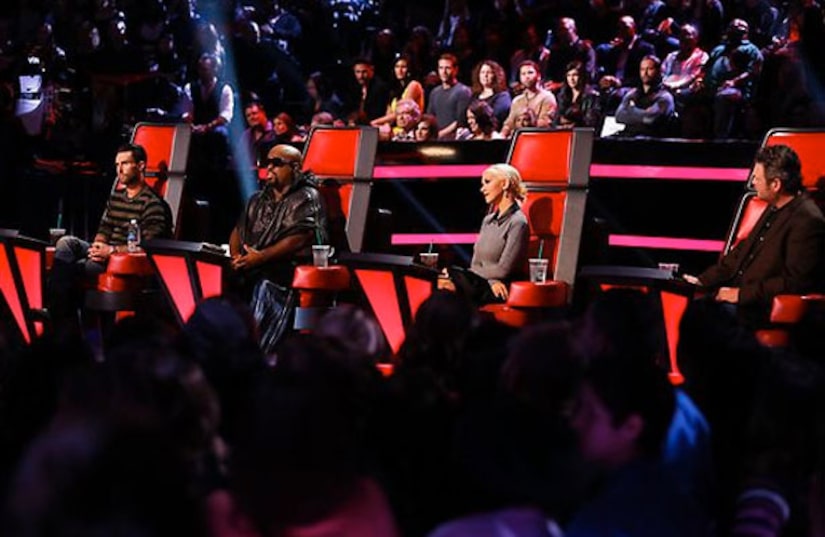 We live blogged the “The Voice” top 10 elimination episode!

9:59 PM: In the tense last minute of the show, Carson Daly announces that America has chosen to rescue team Cee Lo's Caroline Pennell with the Twitter "instant save" and that Kat Robichaud and Austin Jenckes will be sent packing.

9:51 PM: Blake Shelton's Cole Vosbury narrowly missed the bottom three, as the last contestant to move on to the next round based on earlier votes. Who is left in bottom three? Team Cee Lo's Robichaud and Pennell and team Blake's Jenckes.

9:39 PM: The next two safe contestants are... Tessanne and team Christina's Jacquie Lee!

9:28 PM: Next up Will Champlin and James Wolpert from team Adam and Kat Robichaud from team Cee Lo hit the stage to sing Fall Out Boy's "Sugar We're Going Down."

9:11 PM: Carson Daly confirmed live that Adam Levine has been named People magazine's Sexiest Man Alive! When Daly asked how he felt about the honor, Adam replied, "I feel sexy."

9:07 PM: Team Xtina -- including Matthew Schuler and Jacquie Lee -- kicked off the show with a Michael Jackson medley of songs like "Scream" and "Bad." Christina Aguilera looked amazing in knee high boots, sparkly shorts and a long black shirt that showed off her midriff.