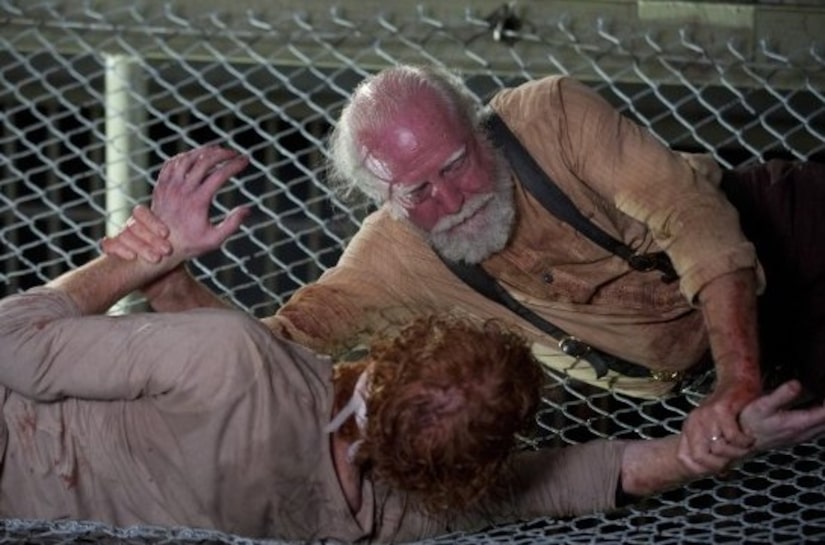 After watching Sunday's episode of “The Walking Dead,” one thing is for certain… Hershel is a tough son of a bitch, but can he fight the Governor?

The rampant, zombie-turning sickness in the prison compound reaches a boiling point, and Hershel turns on the superhero powers to try and keep as many people alive as he can, including Glenn and Sasha, until the Calvary arrives with the antibiotics.

Rick, Maggie and Carl are the only ones left to deal with the swarming walkers, who finally knock down the gates, but the real kicker is the reappearance of the Governor in the episode's last shot, which leaves us with a few burning questions for the next episode.

We knew the Governor had to return, but now what? The one-eyed psycho is menacingly watching the prison, but it looks like he's alone, so he probably won't be going in like gangbusters just yet. There's planning to do.

Has Rick found a middle ground with Carl? Rick thought he had to turn his back on all violent tendencies, for the sake of his sanity and to preserve whatever was left of Carl's innocence. But in this world, that's just not possible. Carl: “You can't keep me from it.” Rick: “Yeah, maybe, but it's my job to try.” Rick and Carl both realize that when it counts, they have to step up together, especially when a gaggle of walkers breaks through the prison fences, and they must shoot them all down.

Now that Glenn is going to live, will he and Maggie finally get married? They should. It's time.

What will Daryl's reaction be when finds out about Carol's banishment? Rick already got the OK from Maggie and Hershel for his actions, but we're pretty sure Daryl won't be so understanding. It's a safe bet he is going to leave to find her.