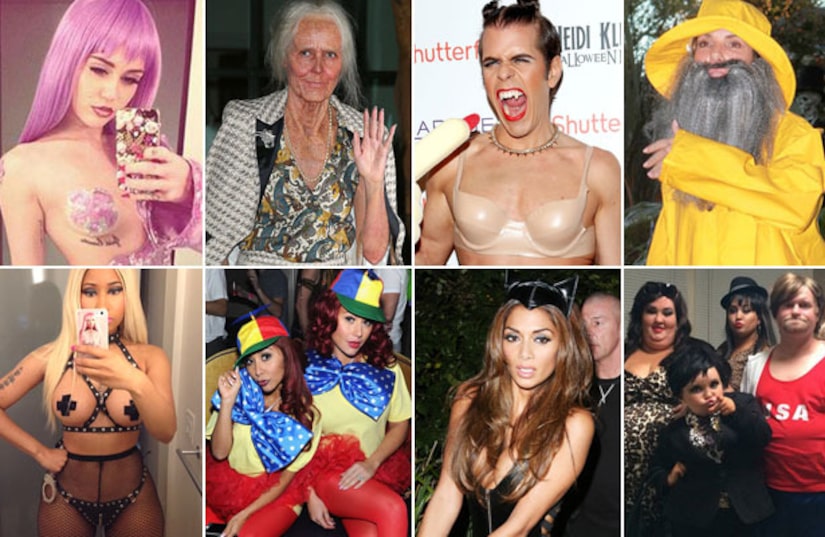 The stars got into the Halloween spirit Thursday night, posting costume pics, hitting the party scene and taking the kids trick-or-treating!

Check out our gallery above of all the best costumes, including NSFW Nicki Minaj (who forgot her pants), the Honey Boo Boo family as the Kardashians, Sandra Bullock as a fisherman, and others!

Recently rehabbed Lindsay Lohan headed to Connecticut to co-host a costume party at Foxwoods Resort and Casino with Floyd Mayweather. LiLo went for the bloody prom princess look as Carrie, while Mayweather was unrecognizable as Freddy Krueger.

Heidi Klum was also playing host at her annual Halloween party in NYC, although you would never know by looking at her! The model was unrecognizable as an old woman. Find out how she created the geriatric look, here.

Bethenny Frankel was among the stars at the party, looking like a true Hollywood beauty as Marilyn Monroe! She really got into character on the red carpet, blowing kisses to photographers.

Miley Cyrus partied it up as Lil’ Kim (see video below) at Adam Lambert and CIROC's Halloween party at Bootsy Bellows on Thursday night, along with stars like David Arquette, Carmen Electra and Kelly Osbourne.