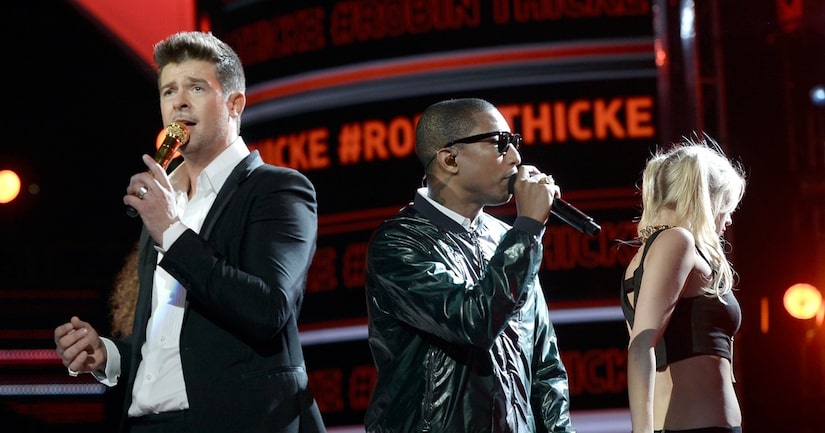 Two of Marvin Gaye's kids are suing singer Robin Thicke over his hit “Blurred Lines,” claiming that it borrows heavily from the soul icon's “Got to Give It Up.”

They state in the documents, obtained by The Hollywood Reporter, that “Blurred Lines” is "blatant copying of a constellation of distinctive and significant compositional elements of Marvin Gaye's classic No. 1 song.”

The legal papers cite an interview Thicke gave to GQ in which he said, "Pharrell and I were in the studio and I told him that one of my favorite songs of all time was Marvin Gaye's 'Got to Give It Up.' I was like, 'Damn, we should make something like that, something with that groove.' Then he started playing a little something and we literally wrote the song in about a half hour and recorded it."

The Gaye family also claims Thicke's "Love After War" is a rip-off of Gaye's "After the Dance."

This comes after Thicke and company filed their own lawsuit in August, trying to preemptively protect "Blurred Lines" from the copyright infringement allegations. Those legal docs said that "being reminiscent of a 'sound' is not copyright infringement. There are no similarities between plaintiffs' composition and those the claimants allege they own, other than commonplace musical elements. Plaintiffs created a hit and did it without copying anyone else's composition."

Nona and Frankie Gaye believe the complete opposite and are alleging not only copyright infringement, but claim EMI is also in breach of covenant of good faith and fair dealing, breach of fiduciary duty and breach of contract for failing to protect their father's music.

The Gayes are asking for damages and contend that EMI should not only forfeit profits from "Blurred Lines," but also be stripped of the right to administer Gaye's song catalog.