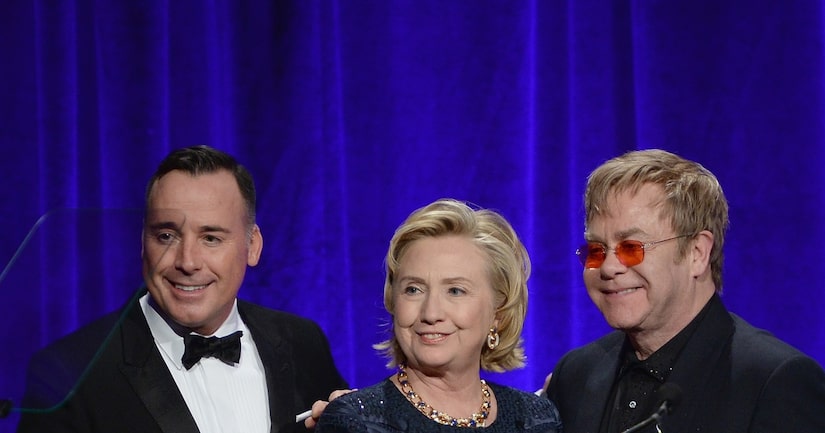 “Extra’s” AJ Calloway hit the red carpet on Tuesday for Elton John’s annual “An Enduring Vision” benefit gala for the Elton John AIDS Foundation, where he caught up with Sir Elton, attendees Alec Baldwin and wife Hilaria, Michael Strahan, Matt Lauer and others.

Hillary Clinton received the foundation’s first ever Founder’s Award. John beamed, “She is a great woman. She's a great friend. She should be the next President of America. I hope she is.”

New father Alec Baldwin was happy to show his support for Elton’s foundation, but loves being at home these days. “I don't want to go out anymore… I want to go home and sit with my baby and my dogs. And my wife, her too.” “Extra” lifestyle correspondent Hilaria Baldwin joked, “Sometimes.”

As for the debut of Baldwin’s new MSNBC talk show “Up Late with Alec Baldwin,” the actor said, “We were in a bit of a hurry and slapped it together very quickly. But it's going really well. We’re having a good time. Talking to people we want to talk to. We haven’t had to spend a lot of time with people we don't want to talk to, which is unusual.”

Calloway also chatted with “LIVE with Kelly & Michael" host Michael Strahan, who put the rumors to rest that he is buying a $25-million NYC apartment. “If I spent that kind of money, I wouldn't call anybody because my dad would call me and say, ‘Where you got that kind of money?’ No. I didn't buy a new apartment. I looked at the apartment because a friend asked me to... I am very happy where I live now. It's very convenient for me and a lot cheaper than that.”

For more information on the Elton John AIDS Foundation, visit the website!