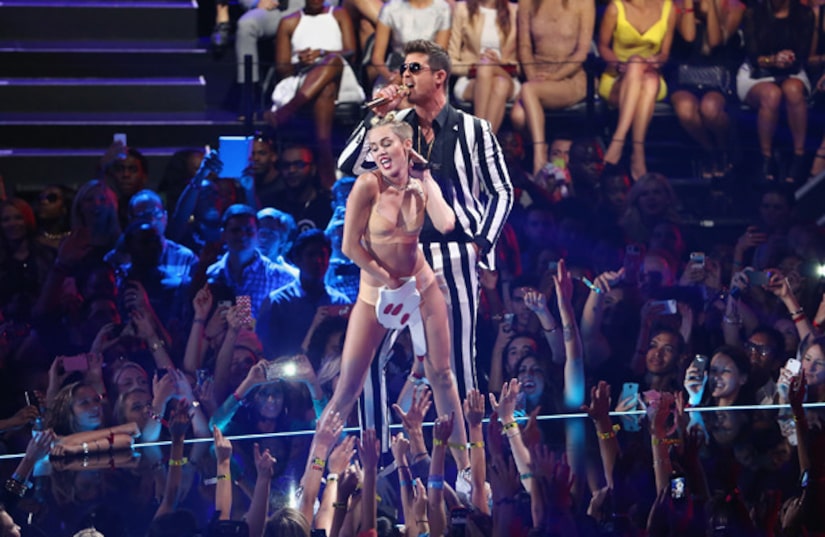 Miley Cyrus wagged her tongue, twerked with teddy bears and rubbed up on Robin Thicke at the MTV VMAs… leaving Hollywood in shock.

In the aftermath of the racy show, pics and gifs have surfaced of the stunned A-list audience, while stars have taken to Twitter for a public discussion of the “We Can't Stop” and “Blurred Lines” number.

Here are some of the outrageous reactions, including Miley's!

Miley Cyrus: "Smilers! My VMA performance had 306.000 tweets per minute. That's more than the blackout or Superbowl! #fact."

James Vanderbeek: “Things I learned watching the #VMAs2013: There's nothing you can do with a foam finger that you can't air on MTV.”

Brooke Shields: "I was Hannah Montana's mother. I don't approve."

Kathy Griffin: “Here's the break down. Miley wants u 2 KNOW...she doesn't want 2B called "Hannah" & she is very far from Montana right now. Thank u very much.”

Judd Apatow: “It's nice that Miley is comfortable with herself” and “I will always have this version of Miley (from the movie “So Undercover”). Let's live in the past and heal.”

Bill Maher: “Watching VMAs. Haven't been in a strip club in a while, but good to see nothing has changed.”

Robin Thicke: "That was dope. Shout out to @MileyCyrus…"